The Affordable Care Act in California

Uninsured rates have decreased in all California counties since the ACA 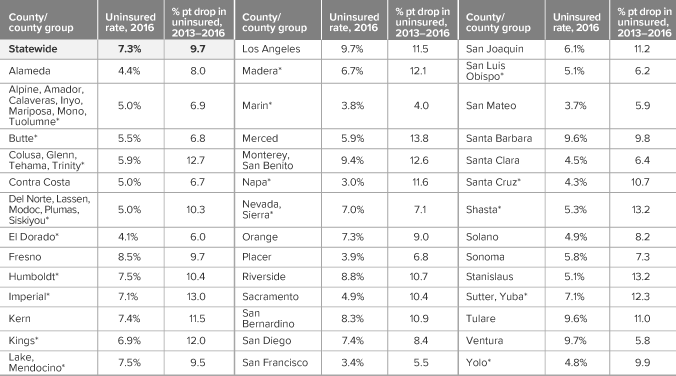 NOTE: Other nonfederal funds include provider fees and transfers for other government entities, such as public hospital systems.

Sources: For studies on the effects of the ACA, see Ghosh, Simon, and Sommers, “The Effect of State Medicaid Expansions on Prescription Drug Use” (NBER, 2017); Brevoort, Grodzicki, and Hackman, “Medicaid and Financial Health” (NBER, 2017); Miller and Wherry, “Health and Access to Care during the First Two Years of the ACA Medicaid Expansions” (New England Journal of Medicine, 2017); Simon, Soni, and Cowly, “The Impact of Health Insurance on Preventive Care and Health Behaviors” (Journal of Policy Analysis and Management, 2017); and Sommers et al., “Three-Year Impacts of the Affordable Care Act” (Health Affairs, 2017). For a comprehensive review of studies examining the effects of Medicaid expansions under the ACA, see the Kaiser Family Foundation Issue Brief.