Californians and the Presidential Debate

Californians are highly inclined to tune in to tomorrow’s presidential debate, even though most have made up their minds about the two major party candidates. What does this tell us about California’s political landscape during this highly consequential—and divisive—election?

At this point in the process, Californians are engaged. The latest PPIC Statewide Survey finds that 85% of California likely voters are either very interested (57%) or somewhat interested (28%) in the upcoming debates between Democrat Joe Biden and Republican Donald Trump. This is consistent with the 87% who are either very closely (53%) or somewhat closely (34%) following news about the presidential candidates. 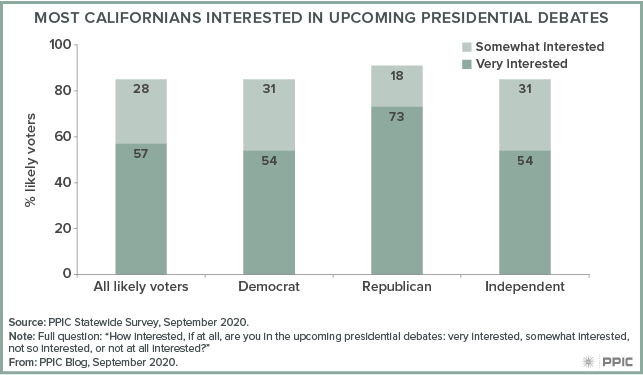 But interest in tomorrow’s debate varies significantly across political parties, racial/ethnic groups, and regions. Those who approve of Trump (74%) are far more likely than those who disapprove of him (49%) to say they are very interested. In terms of party registration, Republican likely voters (73%), more often than Democratic voters (54%) and independent voters (54%), say they are very interested. Whites (61%) are more likely than Latinos (51%) and those in other racial/ethnic groups (50%) to share this view. And reflecting regional political profiles, San Francisco Bay Area likely voters (48%) are the least likely to say that they are very interested in the upcoming debate (59% Central Valley, 60% Los Angeles, 63% Inland Empire, 63% Orange/San Diego). 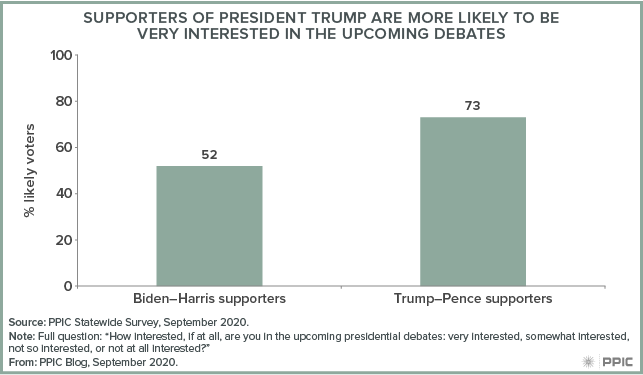 Do these differences reflect an “enthusiasm gap” that could affect voter turnout to the advantage of the Republican ticket? Since Trump’s supporters are much more likely than Biden’s supporters to say they are very interested in the presidential debate (73% to 52%), it could be that they are more inclined to turn out to vote. However, supporters of Trump and Biden are equally likely to say they are very closely following the news about the presidential candidates (55% each). More likely, Trump’s supporters are simply very eager to watch a live performance of the incumbent president on the national stage.

Interest in the debate appears to be another sign of the hyperpartisanship that has spread across the nation and our state, in which political views have become static and polarized. Donald Trump’s approval rating among California’s likely voters now stands at 32% (67% disapprove). It has been in the 30s steadily in 23 PPIC surveys conducted since early in 2017. In a pattern found in every one of our surveys since Trump became president, our latest survey finds overwhelming approval of Trump among Republican likely voters (81%), overwhelming disapproval of Trump among Democratic voters (95%), and low approval among independents (33%). Only 2% have no opinion of Trump, mirroring the 2% undecided in the current race. It would be surprising if anything said during the debate tomorrow alters these hardened opinions.

Tuesday’s debate offers the first opportunity to hear from both of the presidential candidates on a host of critical topics. In PPIC surveys this year, Californians’ top-tier issues have included the pandemic, the economy, racial justice, and climate change. A political wildcard has emerged with the recent passing of Justice Ruth Bader Ginsburg and the president’s nomination of Amy Coney Barrett to the Supreme Court, and this issue may well provide the most prominent sound bite from tomorrow’s debate.

Along with the majority of California’s likely voters, the PPIC Survey team will be watching the debate with great interest to learn more about the themes, issues, and policy solutions that voters will be hearing about in the final weeks of this consequential election.