As California grapples with yet another incident of gun violence that claimed the lives of nine Golden State residents, how concerned are Californians about mass shootings in their part of the state?

In PPIC’s May survey—which was fielded prior to the shooting at a Valley Transit Authority facility in San Jose on May 26—half of Californians say they are very (24%) or somewhat (26%) concerned about the threat of a mass shooting in the area where they live. When we last asked this question in September 2019, shortly following the shooting deaths of 3 people and wounding of 17 others at the Gilroy Garlic Festival, concern was much higher: two in three adults were either very (38%) or somewhat (28%) concerned.

Today, concerns vary widely across partisan groups. Sixty-six percent of Democrats and 44% of independents express at least some concern, while 44% of Republicans say they are not concerned about a mass shooting at all. 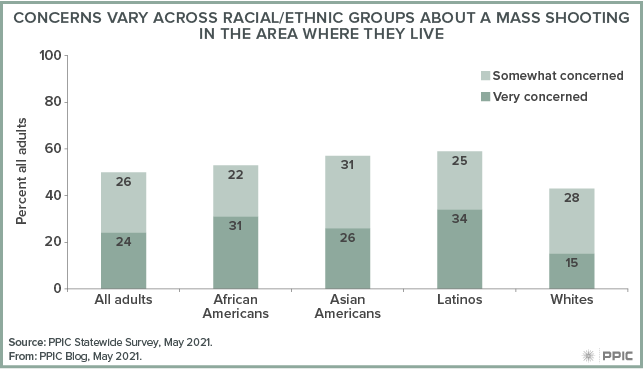 While President Biden and Governor Newsom have called for stricter gun laws in the wake of Wednesday’s violence, some states have recently chosen to relax their firearms restrictions. On May 24, the Texas state legislature approved a bill that—if signed into law by the governor—would allow residents to openly carry handguns in public without a permit or training.

So which direction do Californians prefer when it comes to strengthening or easing state gun regulations? In our question about laws covering gun sales in California, a solid majority (63%) of adults think they should be stricter, while 19% say they should be kept as they are now and 16% think they should be less strict. Solid majorities of Californians have favored stricter gun laws since we began asking this question in 2015. Partisans are deeply divided on the issue: 83% of Democrats and 50% of independents support stricter laws while views among Republicans are evenly split (30% more strict, 35% kept as they are now, 34% less strict). Majorities across the state’s regions and among all demographic groups want stricter gun laws. 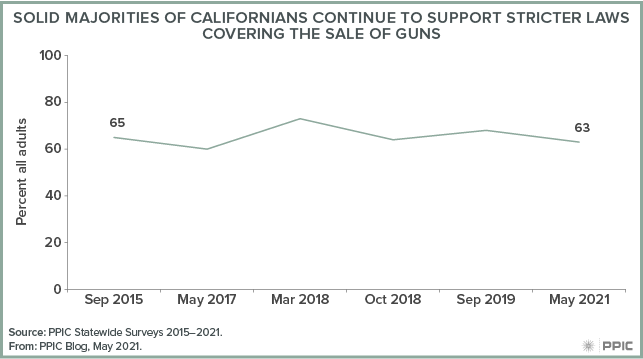 As our state and national leaders debate how to best address gun violence, PPIC will continue to track the opinions of Californians on this critical public safety issue.