Over the weekend, two high-profile, hate-motivated mass shootings—one in Buffalo, New York, and one in Laguna Woods, California—have again turned national attention toward race-related gun violence. In California, which has some of the strictest gun laws in the country, there is a mass shooting nearly every week. Reducing the prevalence of mass shootings remains a persistent challenge for the state and the nation.

Mass shootings are typically defined as incidents of gun violence that injure or kill four or more people. According to data from the Gun Violence Archive, California experienced an average of 44 mass shootings per year between 2013 and 2021. That translates to one mass shooting every 8.3 days. 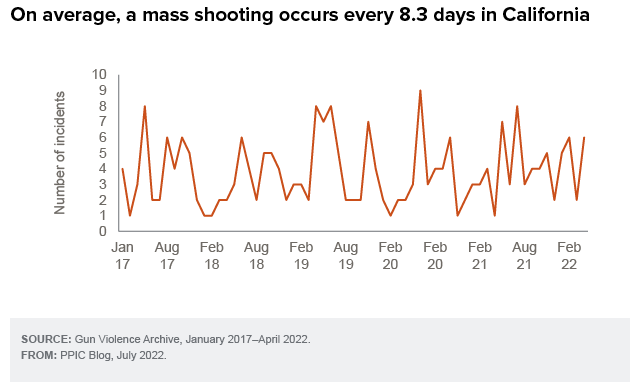 Mass shootings make up about 3% of all California homicides. Mass shooters killed an average of 49 people and injured 167 others in each of the last eight years. By comparison, more than 2,000 homicides occurred statewide in 2020.

Some incidents are deadlier than others, but about one person dies and four others are injured every time a mass shooting occurs—in California and nationally. Mass shooting data are not systematically recorded, so basic victim characteristics are often unknown. Of those killed or injured in mass shootings in California, 56% were male, 18% were female, and the gender of 26% is unknown.

Compared to citizens of other states, Californians are about 25% less likely to die in mass shootings. Between 2019 and 2021, the state’s annual mass shooting homicide rate of 1.4 per one million people was lower than the national average of 1.9. 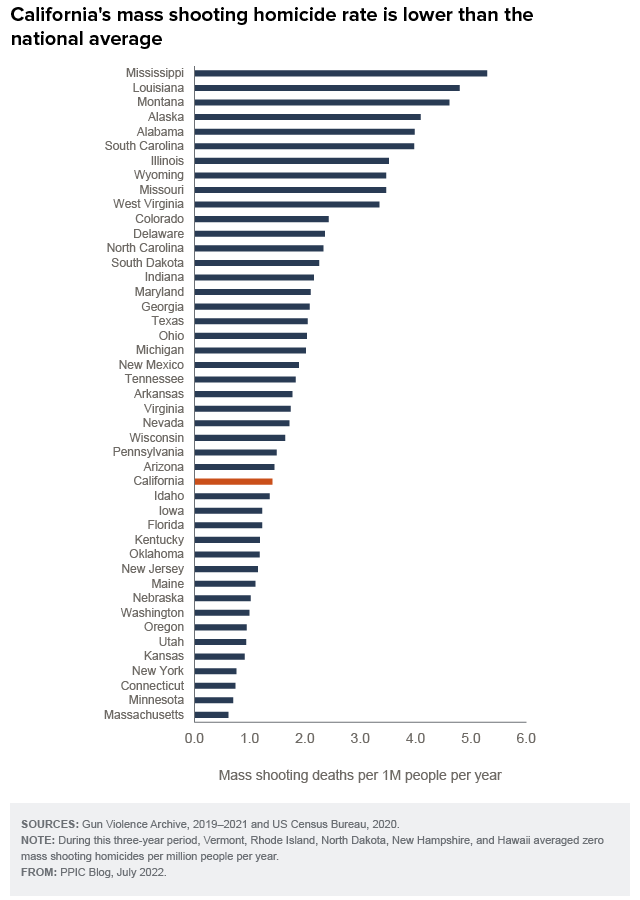 Mass shooters are overwhelming male. Of more than 400 mass shooting incidents that occurred in California between January 1, 2013, and May 15, 2022, females were implicated in just 10. Interpersonal conflicts, workplace disputes, and turbulent romantic relationships preceded most mass shooting incidents. However, racist and hate related incidents—like those in Buffalo and Laguna Woods—have been rising since 2015. About one in five mass shootings is hate related.

Preventing mass shootings presents major challenges. Proposed strategies include tighter gun restrictions and targeted interventions for would-be shooters. It is not clear the extent to which either strategy would reduce the prevalence of mass shootings. California already has some of the toughest gun laws  in the country, and two-thirds of Californians support stricter regulations, which legislators are currently considering.

It is especially difficult to identify those contemplating mass attacks and intervene appropriately. Nearly one in five mass shooters exhibited no outward signs of crisis before they acted. Still, that means four in five did send signals, such as agitation, abusive behavior, and depression. Improving community resources to address the economic, social, and emotional stressors that often underlie these behaviors could help the few people in distress who might resort to gun violence—and the many who do not.