Commentary: What Do We Need to Learn about Preventing Mass Shootings?

This commentary was published by Health Affairs Forefront on September 21, 2022.

The negative public health consequences of mass shootings reach far beyond the people who experience them directly—both temporally and spatially. Understanding the breadth and depth of these deleterious outcomes can help national, state, and local governments build on recently passed federal legislation to design and evaluate integrated policy frameworks that prevent mass shootings and reduce the harm they cause.

In a recent Health Affairs Health Policy Brief, Aparna Soni and Erdal Tekin review emerging research that examines how mass public shootings shape community well-being. For young people, nearby school shootings engender lower self-reported health and greater involvement in risky health behaviors in young adulthood. Mass shootings also appear to pose health risks for the next generation, with infant mortality and premature birth rates rising after a community experiences a mass shooting. Just as the meaning of “community” extends beyond geography, so do the impacts of mass shootings. Shootings that target specific groups of people, such as racial, religious, or sexual minorities, have national consequences because they inflict psychological distress on people who are part of that cultural community, no matter where they live.

An integrated policy framework that could minimize the harm caused by mass shootings might include three broad goals: minimizing the prevalence of mass shootings; reducing injuries and fatalities when shootings do happen; and mitigating the immediate and ongoing harm done to those affected by mass shootings. Achieving each of these goals would require different policy interventions to target the intermediate objectives—shown in the figure below—that could reduce mass shootings, shape how mass shootings unfold, and influence how they impact community well-being. 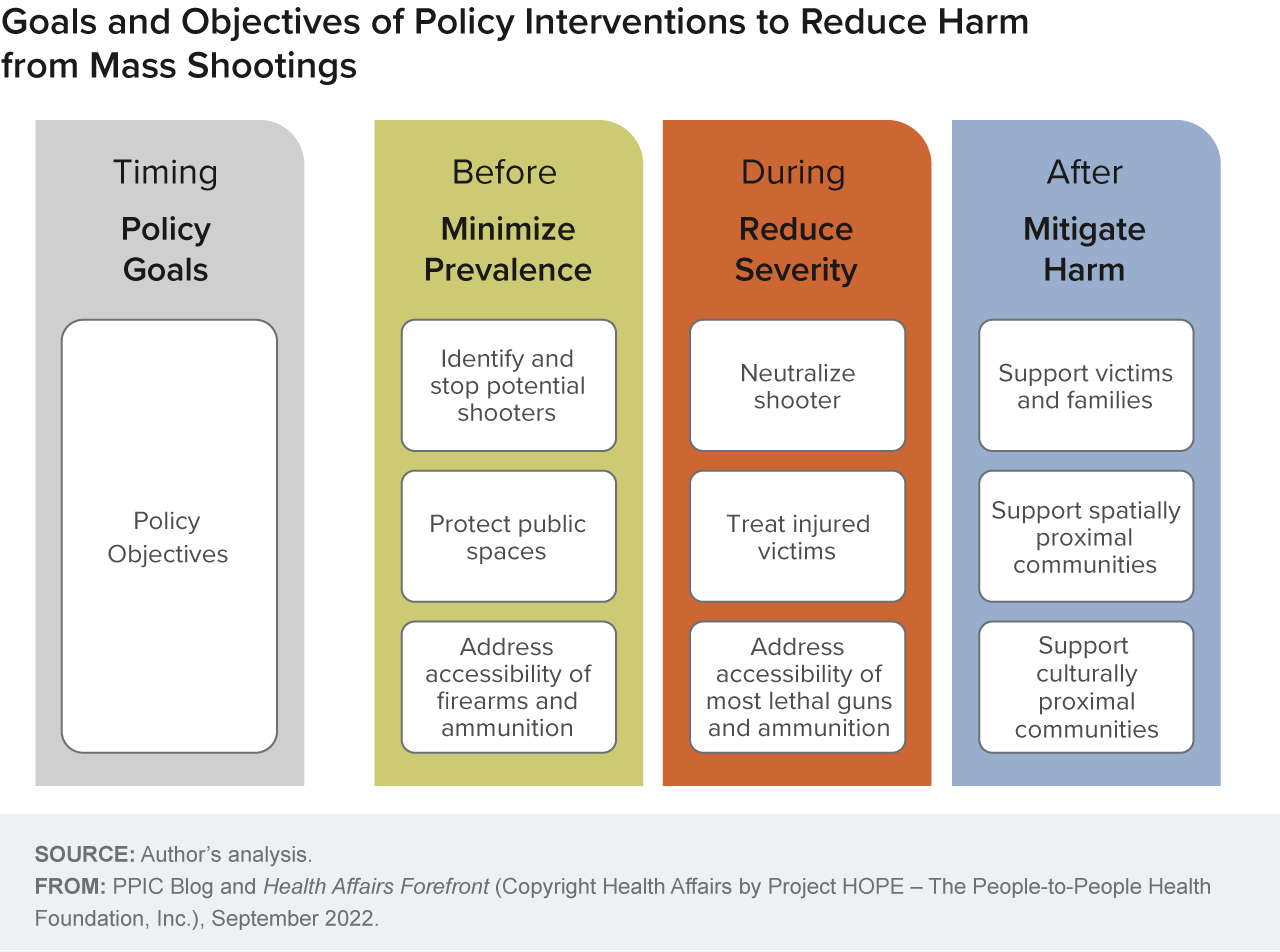 Evaluating whether policy interventions achieve the objectives illustrated above is critical. Thanks to investments recently made in studying responses to active-shooter incidents, experts are building an evidence base about how first responders can rapidly intervene to subdue shooters and tend to the wounded to minimize injuries and fatalities. However, the widely-criticized response to the recent school shooting in Uvalde, Texas indicates room for improvement, especially with respect to how this expertise is disseminated.

Similarly, experts have developed supportive, evidence-based systems to help individuals and communities cope with and overcome traumatic events after they have occurred. Unfortunately, many of these systems are under-resourced and often unavailable to those affected by mass shootings. For example, one national survey of public schools found just 17% had plans to address shooting-related trauma.

Though we have some research on effective interventions to reduce the severity of mass shootings and mitigate harm after they occur, we know less about minimizing the prevalence of mass shootings before they happen. Mass shootings remain a rare form of lethal gun violence—according to Soni and Tekin, less than 1% of homicide victims fall prey to mass shooters each year. Yet mass shootings have grown more prevalent over time. To understand why, consider the figure above. Preventing mass shootings requires some combination of protecting public spaces, stopping would-be shooters, and addressing how weapons are acquired—and there are challenges associated with all three of these approaches.

Protecting Public Spaces
Built environments can be modified to make mass shootings—about 90% of which take place indoors—more difficult. Polling suggests that people do avoid public spaces after a mass shooting, but people also demonstrate a robust willingness and desire to gather in public, as seen amid the ongoing COVID-19 pandemic. Designing or redesigning spaces specifically to thwart these rare events may not be logistically possible, economically feasible, or socially desirable. For example, Soni and Tekin note that 28 states require schools to secure their buildings. Yet most steps that schools have taken to fortify their physical environments are not evidence-based, and actions like increasing visible security measures to protect schools against mass violence have not been evaluated for efficacy, perhaps in part because developing an evidence base around how to prevent rare events is challenging.

Identifying and Stopping Would-Be Shooters
Ideally, we would like to identify likely shooters and intervene to prevent shootings. Research has therefore focused on actual mass shootings and, more recently, on averted attacks. We now understand that chronic social stigmatization and life crises often (but certainly not always) trigger mass shooters. Yet collecting population-level indicators of these attributes is infeasible. Even if such data were available, the rarity of these tragic incidents, combined with the complexity and the interconnectedness of potential contributing factors, make it difficult for researchers to develop reliable statistical models that could accurately predict mass shootings.

In the absence of accurate predictive models based on public data, options that leverage detailed private information are needed to identify shooters and intervene to stop them. Though in its infancy and heavily skewed toward school shootings, research on averted attacks indicates that most were thwarted because someone—usually a friend or acquaintance—said something. Notably, the would-be shooters in more than nine in ten thwarted incidents had plotted against specific targets, and 72% had already acquired firearms.

This research suggests that reporting and evaluation infrastructures that credibly identify threatening—and not just odd or annoying—people could help authorities to more readily disarm dangerous individuals and thwart mass shootings. Some schools have already deployed these “threat assessment systems,” and the results have been promising in terms of reduced violence and improved school climate. A holistic community-based system for assessing and responding to threats would cultivate an informed (rather than fearful) populace that understands the risk factors for mass violence. Such a system would include mechanisms that allow concerned people to report those exhibiting warning signs, as well as protocols that enable accurate and discreet evaluation of whether such reports are credible.

Addressing the Accessibility of Firearms and Ammunition
Gun control features prominently in debates about how to address mass shootings because addressing what kind of firearms and ammunition are accessible and to whom could help achieve two policy goals: preventing mass shootings and reducing their severity. Strategies that limit who can own firearms and ammunition can constrain the pool of likely mass shooters. However, widely opposing views on gun ownership in the US and the need to protect the constitutional rights of the broader citizenry present challenges for this potential policy approach. Moreover, research on the effectiveness of limiting access to guns and ammunition is still emerging. As discussed by Soni and Tekin, red flag laws have shown promise in this regard, as have gun permitting laws.

Limiting availability of certain types of weapons may be a more promising strategy because doing so could also reduce the severity of mass shootings. Specifically, semiautomatic weapons and large-capacity magazines are used in between 20% and 67% of mass shootings. Incidents in which these weapons, especially large-capacity magazines, were used resulted in more injuries and fatalities. Limiting access to large-capacity magazines could reduce mass shooting deaths by up to 15% and injuries by up to 25%. More research—especially experimental and quasi-experimental research—is needed to determine how to structure laws to achieve this objective. For example, outright bans, which are the subject much of the existing research, may not be necessary to realize similar reductions in fatalities and injuries.

Notably absent from the SCA, however, are provisions to improve the knowledge base around which policies and programs best prevent and minimize harm from gun violence generally and from mass public shootings specifically. As Soni and Tekin describe, retrospective and inconsistent data collection along with policy analyses based on weak research designs have contributed to our collective inability to reduce our nation’s gun violence problem. Planning for ongoing data collection and implementing policies and practices with an eye toward how to evaluate them are investments that can yield large dividends: we will know which interventions work and which do not and can spend our public money accordingly.

Mass shootings constitute a small subset of the gun violence problem. Yet they have increased in prevalence and severity in recent years. Similarly, evidence that mass shootings negatively affect public health is mounting. While expansive in scope, the new federal legislation does not pull all possible policy levers that could minimize mass shootings, reduce their severity, and mitigate their public health impacts. Augmenting the SCA within a policy framework that targets each of these outcomes, prospectively collecting robust data, and rigorously evaluating implemented policies can lead to safer and healthier communities.