With Governor Newsom and President Trump clashing over policy and federal funding, how do Californians view the two leaders? Our January survey found that opinions of the governor and the president are very different—and very partisan. But while the partisan divide runs deep, Californians are unexpectedly hopeful about overcoming political differences and working together.

Not surprisingly, newly elected Governor Newsom is far more popular in California than President Trump. Our first reading of Governor Newsom’s approval rating came within the first few weeks of his term. A plurality of Californians said they approve of his job performance, while one in four disapproved and one in three were unsure how to rate him. Meanwhile, three in ten Californians approved of President Trump’s job performance, while two in three disapproved. This question was asked during and after the partial government shutdown in January. 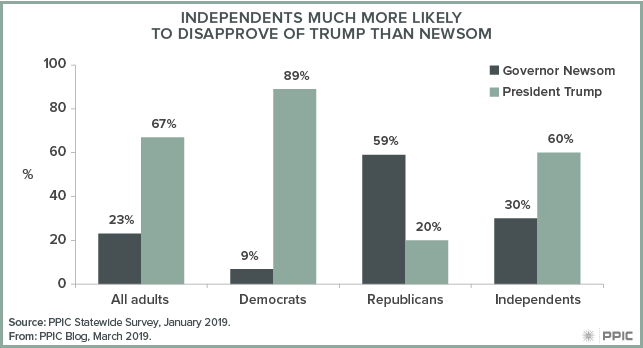 The two leaders couldn’t be in more different positions when it comes to their legislative counterparts. Governor Newsom is working with Democratic supermajorities in both houses, while President Trump has to work with a new Democratic majority in the House of Representatives and a slim Republican majority in the Senate.

Californians are optimistic that Governor Newsom and the California Legislature will be able to work together and accomplish a lot in the next year. In fact, the share of Californians who are optimistic (67%) is the highest it’s been since we began asking this question in 2006.

In contrast, Californians’ views on the likelihood of cooperation in Washington, DC, are at a record low—with just 25% of Californians optimistic. Notably, Democrats and independents are polarized, while fewer than half of Republicans are optimistic about cooperation at either level. 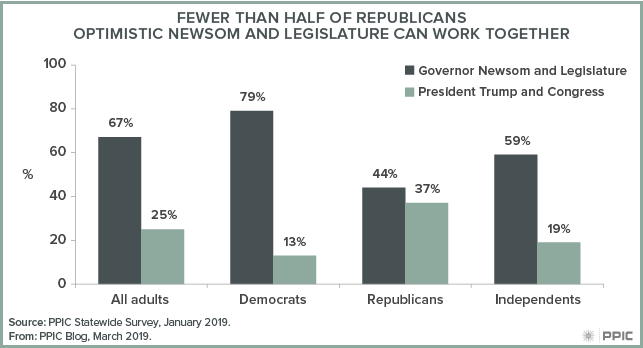 Despite the rancorous political environment and the contentious relationship between Governor Newsom and President Trump, most Californians (58%) are optimistic that Americans of different political views can still come together and work out their differences. Notably, about half of Democrats (52%), Republicans (49%), and independents (52%) are optimistic these differences can be overcome. As the governor looks to advance his agenda during his first year in office, we will continue to track Californians’ perceptions of their leaders and monitor attitudes about the state and the nation.