With little time to spare, the legislature last week passed a $15 billion school construction bond. A signature from Governor Newsom will place the bond measure—called the Public Preschool, K–12, and College Health and Safety Bond Act of 2020—on the March 2020 primary ballot. Given Californians’ general support for funding education, how do they feel about bond measures for school construction projects?

It’s important to note that the PPIC Statewide Survey has not yet asked Californians about this particular measure, which would provide funding across K–12 and higher education systems. However, we have consistently found that Californians are supportive of bonds for each system individually. (We did not ask about specific dollar amounts.)

In our April survey, about six in ten adults (62%) and likely voters (57%) said they would vote yes on a bond for K–12 school construction projects, while in November 2018 two in three adults (66%) and about six in ten likely voters (57%) supported a bond to pay for construction projects in California’s public higher education system. In both surveys, there was majority support across regions and demographic groups—except among whites (47%) for the K–12 bond. For both types of bonds, support was lower among whites than other racial/ethnic groups, and support decreased as age and income levels rose. 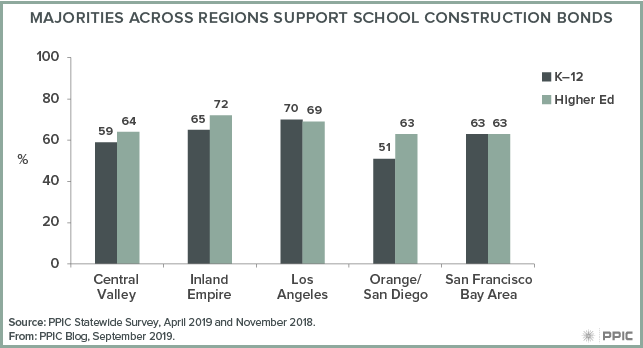 Despite this widespread support for these bonds, we found a significant partisan divide. For both bond questions an overwhelming majority of Democrats as well as smaller majorities of independents have been in favor; far fewer Republicans have been. 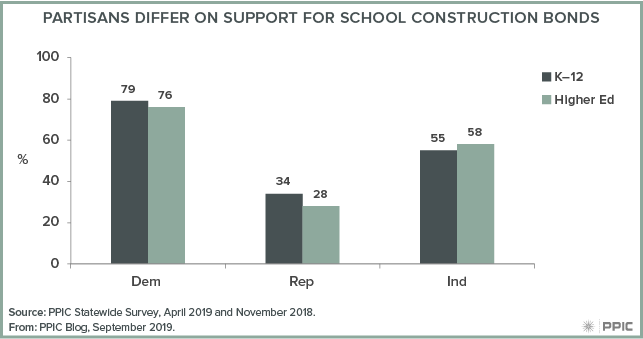 With California set to play a prominent role in the March Democratic presidential primary—potentially drawing large numbers of Democratic voters—this partisan divide could play a role in passing the bond.

We still don’t know how Californians will perceive this particular bond—in terms of the dollar amount or the joint funding of K–12 and higher education. Stay tuned for more from the PPIC Statewide Survey as we will track support for this bond, as well as many other important 2020 election issues.