Californians’ Priorities for Their New Leaders

California enters 2019 with Democratic super-majorities in both chambers of the state legislature and a Democratic governor replacing another for the first time in more than a century. What do Californians want state leaders to prioritize? Although the state is projected to have a budget surplus of $21 billion, many are pessimistic about the state’s short- and long-term economic prospects. These economic concerns are possibly linked to Californians’ policy and spending preferences, and they are likely to inform their attitudes toward the governor’s recently released budget proposal for the next fiscal year.

According to the December 2018 PPIC Statewide Survey, fewer than half of Californians (46%) say the state will have good times financially in the next 12 months. The share of adults holding this view hasn’t been this low since October 2014 (45%). 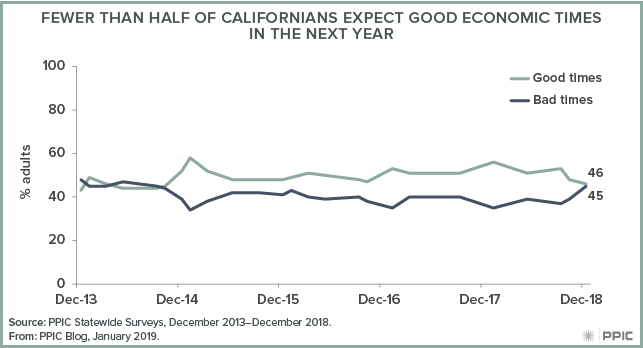 About one in three (32%) also say California will be a worse place to live in 2025, and 50 percent think children growing up in the state today will be worse off financially than their parents.

When asked what the state government’s most important priority should be in planning for California’s future, 39% of residents say it should be improving jobs and the economy. In the shorter term, what issues should state leaders prioritize in the coming year? Findings from the December survey offer some possible answers.

When asked what they would prefer to do with a projected budget surplus, a majority of Californians (57%) say they’d like to increase state funding for education and health and human services. When asked about several potential policies—most of which Governor Newsom highlighted during his campaign—majorities of adults say universal health coverage (60%) and tuition-free community college (53%) should be top priorities for new state funding. Fewer than half (48%) say the same about universal preschool, and one in four (25%) want to prioritize high-speed rail. 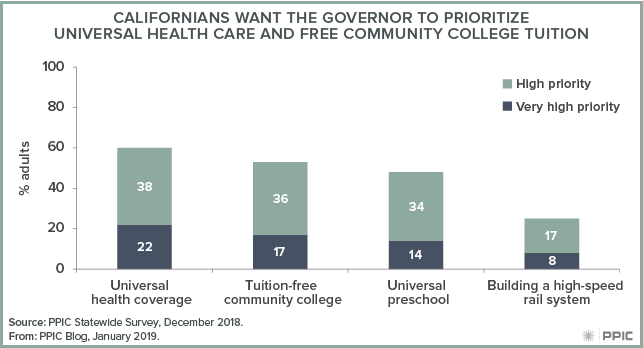 These findings underscore Californians’ preferences for programs that can help reduce economic uncertainty. They also indicate that Californians’ priorities are aligned with Governor Newsom’s budget proposal for the next fiscal year. The governor’s budget includes funding for an expansion of Medi-Cal coverage to young adults regardless of immigration status, a second tuition-free year at community college, and steps toward universal preschool for income-eligible four-year old children.

Over the next five months, as the governor and state lawmakers work toward a final budget, Californians will have the opportunity to voice their opinions. Stay tuned to the PPIC Statewide Survey as we track Californians’ attitudes toward new leaders and key policy issues.