Mark Baldassare December 14, 2018
NEVER MISS AN UPDATE!
Sign up for our blog alerts to receive insights from PPIC by email.

With the release of California’s official Statement of the Vote, the state’s final tally is in for the November 2018 election. This midterm election will mostly be remembered for California’s role in changing party control of Congress. But several other statewide results also stand out: 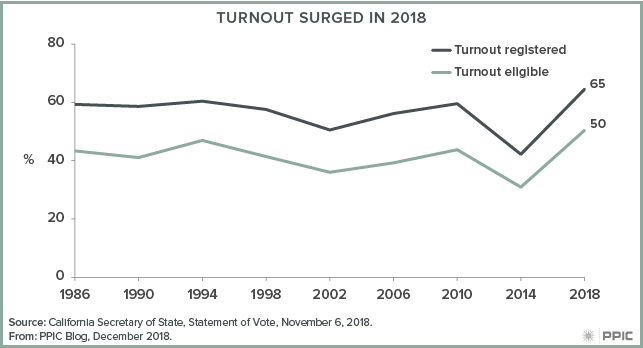 It’s no coincidence—given what PPIC studies say about the profiles of likely voters and nonvoters—that rising political participation in California means that the Democratic Party is becoming more dominant and that statewide officeholders are more likely to reflect the state’s diversity. And it is important to note that Californians continue to be highly selective about making public policy at the ballot box as more and more voters engage with the citizens’ initiative process. Still, millions of Californians are not registered to vote and don’t cast ballots. These residents tend to identify as “have nots” and are often most in need of government services. For this reason, the PPIC Statewide Survey will continue to provide a voice—for all adults in addition to likely voters—on state and national issues. Tracking policy preferences across the broadest swath of Californians is especially critical today, as newly elected state officeholders and state and federal legislators switch from campaign mode to policymaking.