Early childhood education, a policy priority for Governor Newsom, is viewed as important by an overwhelming majority of Californians. In the April 2019 PPIC Statewide Survey, 78% of Californians and 88% of public school parents said that attending preschool is important to a student’s academic success in kindergarten through grade 12. 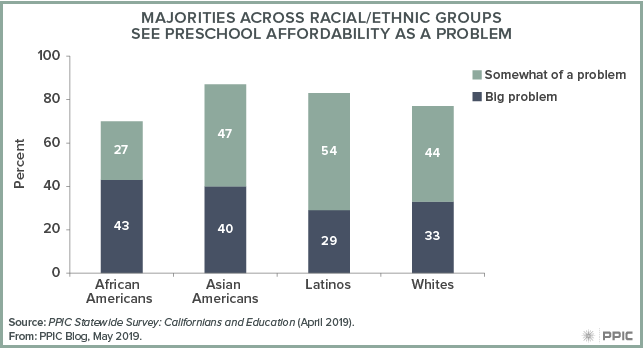 Governor Newsom has proposed new funding that would address some of these affordability concerns. In April, we asked Californians if they were in favor of or opposed to the governor’s initial budget proposal from January, which allocated $125 million to expand full-day, full-year preschool to all eligible low-income four-year-olds. A majority of Californians—about two in three adults and three in four public school parents—favored this proposal. In addition, majorities across all demographic groups and regions favored it. In the May budget revision, the proposed funding was reduced to $31 million, which would pay for 10,000 new full-day preschool slots starting April 2020.

There is slightly less support for state-funded preschool in general: six in ten adults say that the government should fund voluntary preschool programs for all four-year-olds. State-sponsored preschool is a highly partisan issue, with Democrats much more likely than independents or Republicans to express support. 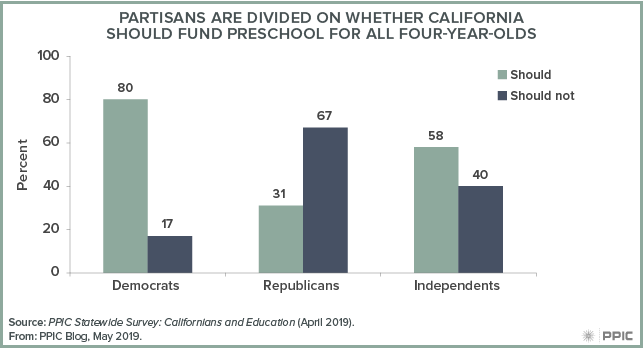 With the release of the governor’s revised spending plan on May 9, the state budget process is well under way; the deadline for enacting the final budget is June 15. PPIC will continue to monitor the governor’s proposed allocations for early childhood education and the opinions of Californians on the issue.