Dean Bonner March 20, 2019
NEVER MISS AN UPDATE!
Sign up for our blog alerts to receive insights from PPIC by email.

From building a border wall to declaring a crisis at the border, immigration policy proposals from the Trump Administration continue to provoke controversy and stir national debate. How do Californians—who live with the nation’s highest share of immigrants—view such proposals? And more broadly, how have their views of immigration policy changed over time?

When it comes to a border wall, Californians’ views are decidedly different than those of adults nationwide. Fewer than three in ten Californians (28%) supported building a wall along the entire border with Mexico in our January survey, but twice as many American adults (56%) were in favor of this proposal in a January CNN survey.

However, the wall is a highly partisan issue in California. Support among California Republicans is quite notable, with 76% in favor. Among other partisans—and across regions and demographic groups—support fails to eclipse 40%. 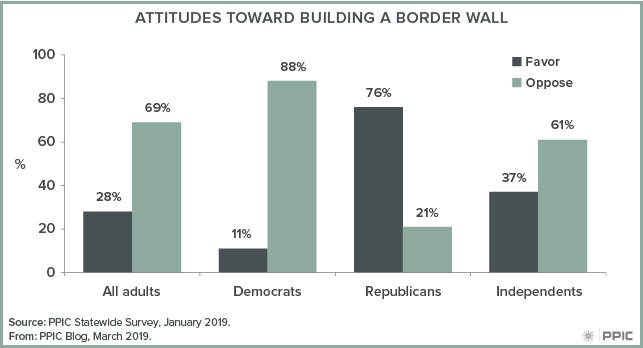 Again, there are stark partisan differences over this topic in California. Republicans (58%) are far more likely than Democrats (14%) and independents (28%) to call the border situation a crisis. Across regions and demographic groups, one in three—or fewer—say this. 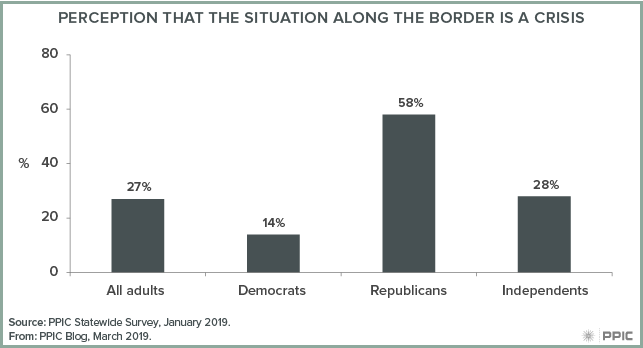 Californians’ views of immigration policy have changed a great deal since the passage of Proposition 187 nearly 25 years ago. Supported by 58% of the vote, Prop 187 sought to make undocumented immigrants ineligible for public benefits. Blocked by a federal judge, the measure was never enforced. 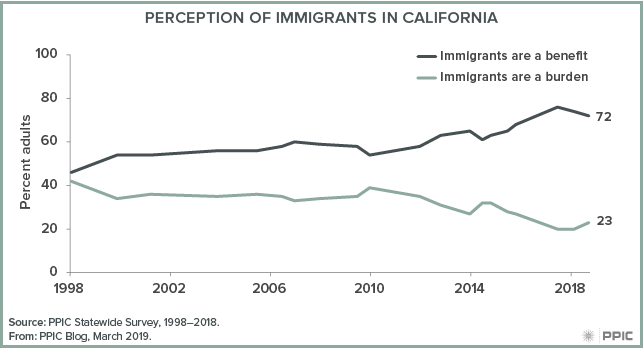 Since the PPIC Statewide Survey last talked to Californians, President Trump has declared a national emergency as he seeks funds to build the wall, while California—along with other states—has sued the federal government over this claim. As California and the Trump Administration continue to spar over immigration policy, stay tuned while we track Californians’ perceptions and policy preferences related to this issue.