A recent paper on climate change in California and the West has been in the news and raising concerns. Based on extensive analysis of tree ring data—a good measure of summer soil moisture—the authors postulate that most of the region is in an unfolding “megadrought” that began in 2000 and is the second worst in the past 1,200 years.

What does this mean for California water management? If the state is in a megadrought, it means a great deal. We should plan accordingly.

Megadrought is a term of art, but essentially it refers to decades-long periods of low precipitation and soil moisture, often associated with reduced mountain snowpack. These periods are chronically dry, with less frequent wet years and drier dry years.

California’s climate signals suggest that the state is experiencing a megadrought along with much of the West, as evidenced by precipitation and, perhaps most important, temperature anomalies.

In the figure below we plot the departure from average statewide precipitation over the past 70 years (since our modern water supply system was put in place and high-resolution climate data was collected). Starting in 1999 the state entered a 22-year period (including this year) where dry years occurred three times more often than wet years. This is roughly double the frequency of dry years compared to records going back to the late 1800s.

The occurrence of significantly more dry years than wet years over the past two decades has created a cumulative precipitation “deficit” that is quite large—bigger than any 20-year period in the past 70 years (and comparable to the extended dry period that included the Dust Bowl).

But this alone does not make for a megadrought. The other key factor is temperature.

Warm years diminish snowpack, reducing an important source of spring runoff into reservoirs. Extended warm and dry periods lead to snow droughts. However, the big effect of warming may be on evaporative demand. Think of it as the “thirst of the atmosphere.”

As the figure shows, the 21st century has been exceptionally warm—the warmest period since comprehensive record keeping began. This has amplified the impacts of precipitation deficits and gives reason to believe California is in an unfolding megadrought. 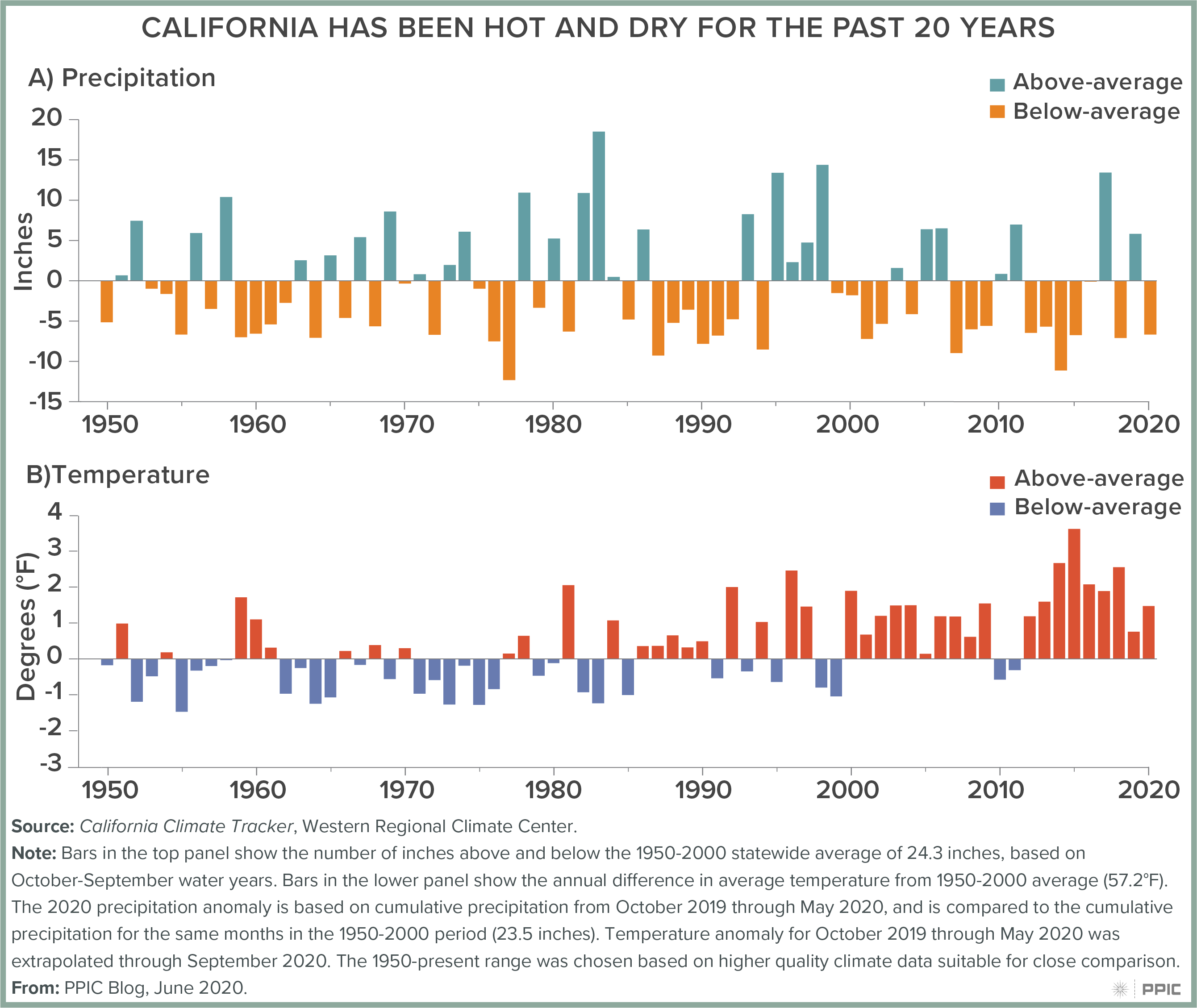 During dry periods, reservoirs are drawn down until they can no longer supply more water than nature provides in a given year. Groundwater pumping increases to make up the difference. When a drought is “broken” by a wet year, California’s reservoirs fill quickly because their storage volume is small relative to runoff. But aquifers, which rely on the slow percolation of water through soils for recharge, do not fill rapidly. It takes many years of wet—along with disciplined groundwater management—to recover from extra pumping during drought.

With megadroughts, less frequent wet years create an overreliance on aquifers and limit the ability to recharge them. Groundwater deficits accumulate, a problem compounded by high evaporative demand during dry, warm years. Nowhere is this more evident than in the San Joaquin Valley, where overdraft jumped dramatically in the past two decades, making it harder to achieve sustainable groundwater management.

Deficits and evaporative demand also affect the state’s fragile freshwater ecosystems and headwater forests. California’s plant and animal communities are adapted to occasional drought, but water and forest management practices have made these communities much more vulnerable. The warm, dry 21st century accelerated declines in freshwater ecosystem health and native biodiversity, and contributed to extensive tree deaths in headwater forests.

The new research on megadrought in the West concludes that roughly half of the current drought is from natural climate variability while the other half is associated with warming trends driven by global climate change.

There are strong indications that this megadrought is a preview of a future that is warmer, with more intense droughts. If so, drought planning and preparation will need to change. A first step would be to place less emphasis on the cool, wet 19th and 20th centuries as a guide to the future. Rather, we should focus on the warm, dry beginning of the 21st century as the new baseline to inform drought adaptation efforts.