The 2020 census count is still underway, with doubts about how long it will continue as COVID-19 threw the original schedule into turmoil. The Census Bureau had requested an October 31 extension to finish field work and another four months for other deadlines, including the requirement to provide total state population counts to the president by December 31.

The Trump administration denied that request, but a court decision last Friday overturned that denial, and that decision has since been upheld by the 9th Circuit Court of Appeals. Despite some pushback from Secretary of Commerce Wilbur Ross, the longer timeline remains in place for now.

In some respects, California’s count is going well. The state’s self-response—where residents provide their information to the census on their own—has recently exceeded its 2010 number by a small amount, despite significantly lagging as recently as a month ago. California is one of 21 states to reach this milestone.

The state’s total response rate is 99.2%, which is also good. That is the share of households from which the Census Bureau has gotten some sort of response, a number that includes the Bureau’s in-person follow-up to reach households who do not self-respond. California’s total response is slightly ahead of the rest of the country—even outpacing Florida but not Texas, the two states with probably the most growth since the last census ten years ago. 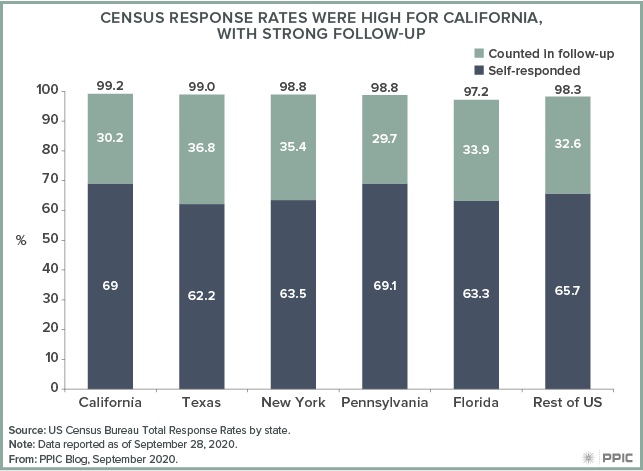 Despite these promising signs, California is not yet assured of a good count. The census is a game of inches, and what matters is not how many households respond but the quality and completeness of the information collected about individuals. The Bureau typically spends much of the last month of field work trying to reach just the last few percent of the population. The more the Bureau must rush, the more likely it is to get this last information from a non-responding household’s neighbors—a less accurate approach.

Rushing may also prevent the Bureau from conducting some of its usual data quality checks in the field while the count is still underway. Missing just two to three percent of the population would be a major failure with significant consequences for representation and federal spending.

A shortened timeline may further compromise data processing after field work is done. In the past, the Bureau has used administrative records to fill in missing information, which greatly improves accuracy and will be even more important given the challenges of counting during a pandemic. But a shortened schedule would require reporting state total population figures to the president just three months after the end of field operations, a full two months shorter than the Bureau expected to have before the pandemic.

The best way to avoid these problems would be to continue with the October 31 deadline, giving the Bureau the extra time it originally requested.

Options for California are otherwise more limited. The state can and must continue its efforts to get a strong count for whatever time remains. After that, if the quality of the count is low, the state might fight to get a better count or even conduct its own data collection. However, the cost, complexity, and duration of any state-level census would likely be prohibitive. The best path by far is to ensure a good count in the first place, and to provide the time to make it possible.