The decennial census count is in crisis. The coronavirus pandemic has depressed self-response rates across the country, and the Trump administration has not provided the extra time requested by the Census Bureau to address this problem.

Today, the Bureau’s in-person follow-up begins in earnest. Historically, these efforts have brought up low responses rates—but they are more difficult and dangerous in the midst of the pandemic. The result might be a significant undercount for underrepresented and underserved communities, with consequences for political representation and federal funding that will last a decade.

However, this solid performance relative to other states masks persistent weakness in parts of California. Many rural counties have response rates that linger well below 50%, including Mono (20.3%), Alpine (25.0%), and Trinity (28.0%). 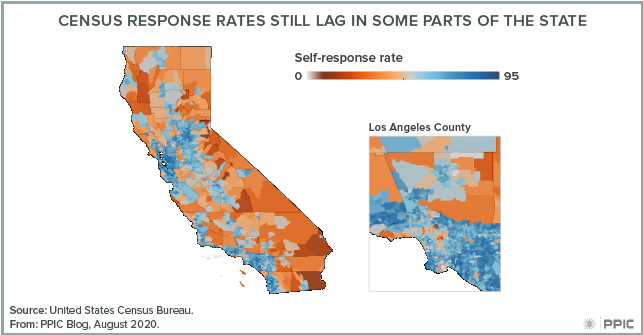 Neighborhoods in the central city of Los Angeles that have high shares of noncitizens or renters are a particular concern: a few of these areas have response rates languishing in the low teens, while others have response rates between 20% and 40%. Low-income and immigrant communities also have low response rates in other large counties, for example, in the northwest corner of Kern County or the Bayview–Hunters Point area of San Francisco. If California ends up with an incomplete count, these are the parts of the state that will receive fewer government dollars and less political representation.

The Census Bureau currently plans to wrap up counting in the field by September 30, a month earlier than originally anticipated. This newly shortened timeline will make it even harder to count Californians who are struggling during the pandemic and who have limited time, resources, and capacity to respond to the census. To meet this aggressive timeline, the Bureau hopes to add staff and offer them financial incentives to work longer hours. The extra effort is important, but it cannot happen in a vacuum—other organizations will have to step up to help.

The state is working to develop a plan for reaching low-response communities. So far these efforts will focus on households in 21 counties (though almost 60% of these households are in Los Angeles County). The state will work with local trusted messengers to expand safer outreach activities in place of the in-person outreach that was originally a significant part of the strategy. These activities will include phone and text banking, social media events, and outreach coordinated with essential service providers like COVID-19 testing sites and food banks.

To support these outreach activities, the state will have just a small fraction of the original $187 million dedicated to boosting the census count, since it had not expected this level of outreach activity this late in the process. Nonetheless, the goal of counting all Californians will depend on the state’s persistence and continued efforts in reaching out to local organizations to keep up the momentum and get people counted.