During 2020, the prison population plunged as California authorities took measures against the coronavirus. In January 2020, California state prisons held 33% more prisoners than they were designed to hold, at 122,000 people. By December, only 94,500 were incarcerated, a decrease of 27,500. Despite this sharp drop, which dwarfs those made by other states, overcrowding in California prisons remains a threat to prisoners’ health.

The 23% population drop for California prisons stands out in a year when state prison populations plummeted across the nation. Of 29 states with easily accessible data for 2020, decreases ranged from 9% to 26%—a few hundred to many thousand inmates in each state.

In total these states saw a reduction of 125,600 prisoners. California’s drop constituted 22% of that total. Texas had the next largest reduction, at 16% of the total, or 20,000 inmates. Illinois was third with 9,000 fewer inmates—or 7%—less than half of Texas and one-third of California.

Individually, just three states saw larger proportional drops than California during 2020. Prison populations in Colorado, Connecticut, and Illinois each fell by about 25%. By comparison, Texas started with far more prisoners than other states—nearly 141,000—so its reduction of 20,000 prisoners was just 14% of its prison population. 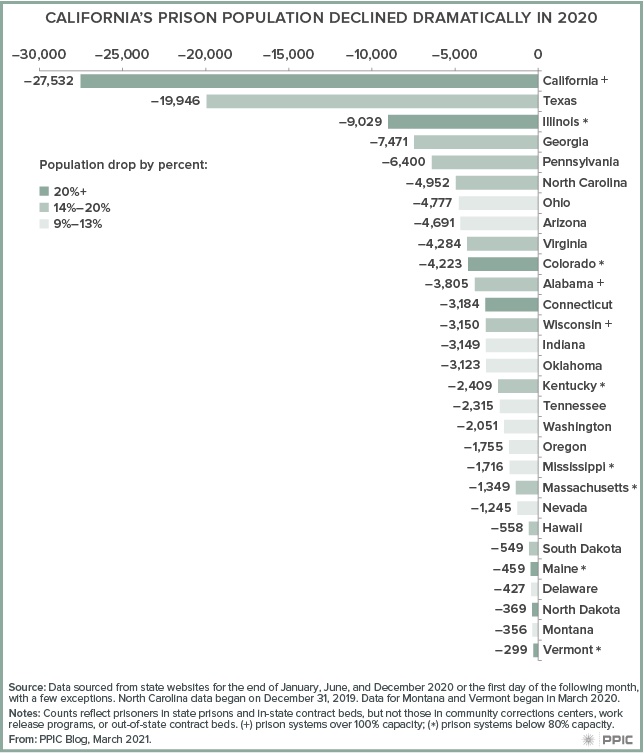 However, not all states have relieved the overcrowding that facilitates the spread of the coronavirus. Crowding is measured relative to capacity, which can be reported differently. Design capacity, for example, is typically fixed and based on architectural plans. It is usually lower than operational capacity, which can vary if beds are added. Unfortunately, we do not always know which type of capacity a state is reporting.

Still, prison populations in seven states—Colorado, Illinois, Kentucky, Maine, Massachusetts, Mississippi, and Vermont—stood at less than 80% “capacity” in December. Notably, Illinois was at 66% design capacity. By contrast, California’s system remains 3% over design capacity—with 10 California prisons more than 20% over capacity despite the 2020 population drop.

Amid COVID-19, capacity conditions pose an acute risk to incarcerated people and workers, and some miscalculations in California led to COVID-19 propagating behind bars. Since the onset of the pandemic, officials confirmed just over 49,000 COVID-19 infections among California prisoners, 211 of whom died—a 0.4% mortality rate. Twenty-six prison workers also lost their lives after contracting the virus.

Furthermore, people awaiting transfer to prison are inflating today’s jail populations. Earlier in the pandemic, prison admissions were halted. By December 2020, approximately 7,000 jail inmates were awaiting transfer to prison at daily cost to the state of $94 per inmate—and an increased risk of infection among jail inmates. In January, transfer slowly resumed under new virus protection procedures.

Aggressive vaccination schedules may help reverse infection and mortality trends at state prisons. As in nursing homes, infection rates seem to be slowing as efforts to vaccinate prisoners have sped up. Forty percent of inmates are now vaccinated.  In the last two weeks, California reported fewer than 300 new inmate infections, as compared to thousands in some weeks past.

However, the evolution of the coronavirus has shifted in the state’s communities, where new variants pose unknown risks. It therefore remains critical for prison administrators to approach transfers to and between prisons cautiously while managing overpopulation.