Heather Harris, Joseph Hayes July 15, 2021
NEVER MISS AN UPDATE!
Sign up for our blog alerts to receive insights from PPIC by email.

The COVID-19 pandemic has deeply impacted California’s prison system. California reduced the prison population more than any other state and implemented a robust testing system that registered more than 276,000 tests per month at its peak, yet California prisoners endured many of the worst outbreaks in the nation. In total, nearly 50,000 prisoners have contracted the virus and 227 have died. Although most prisoners are now vaccinated, vaccination rates among prison staff are much lower. Persistently overcrowded facilities may also prolong the pandemic’s impact on imprisoned people.

Within eight months of COVID-19 being detected at the California Institution for Men in March 2020, the coronavirus spread to all California prisons. Pelican Bay, the state’s highest security prison, was last to register an infection in October 2020. Coronavirus cases peaked in the prison system slightly before they did nationally, with monthly infections nearing 18,000 in December. Peak deaths followed: 61 prisoners succumbed to the virus in January. 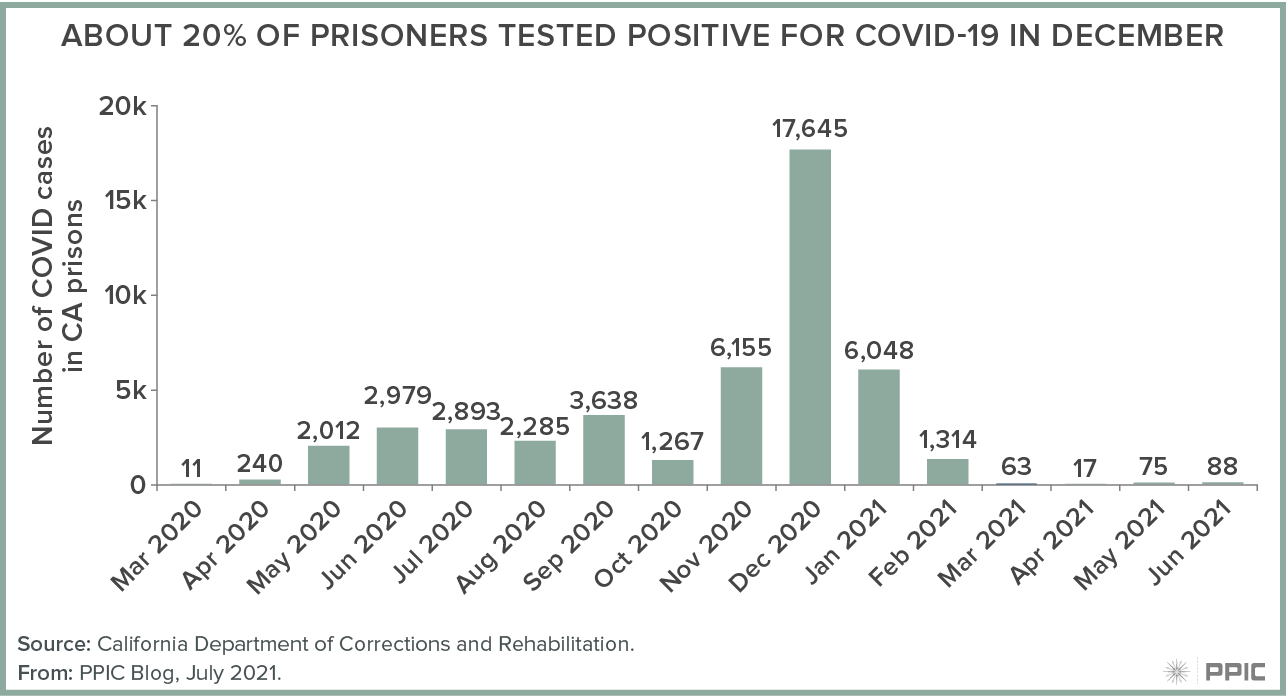 Just as in jails, COVID-19 infection rates are associated with prison crowding: prisons with deeper overcrowding problems prior to the pandemic experienced more widespread outbreaks than less-crowded prisons.

While overcrowding has lessened in the past year and a half due to a large decline in the prison population, it is still a widespread problem. All but two prisons were at or over capacity in March 2020. Last month, 21 prisons were at or over capacity, with five near 150% capacity. And although California’s prison population is still historically low, it has begun to rebound, with 5,600 more people incarcerated today than in January. 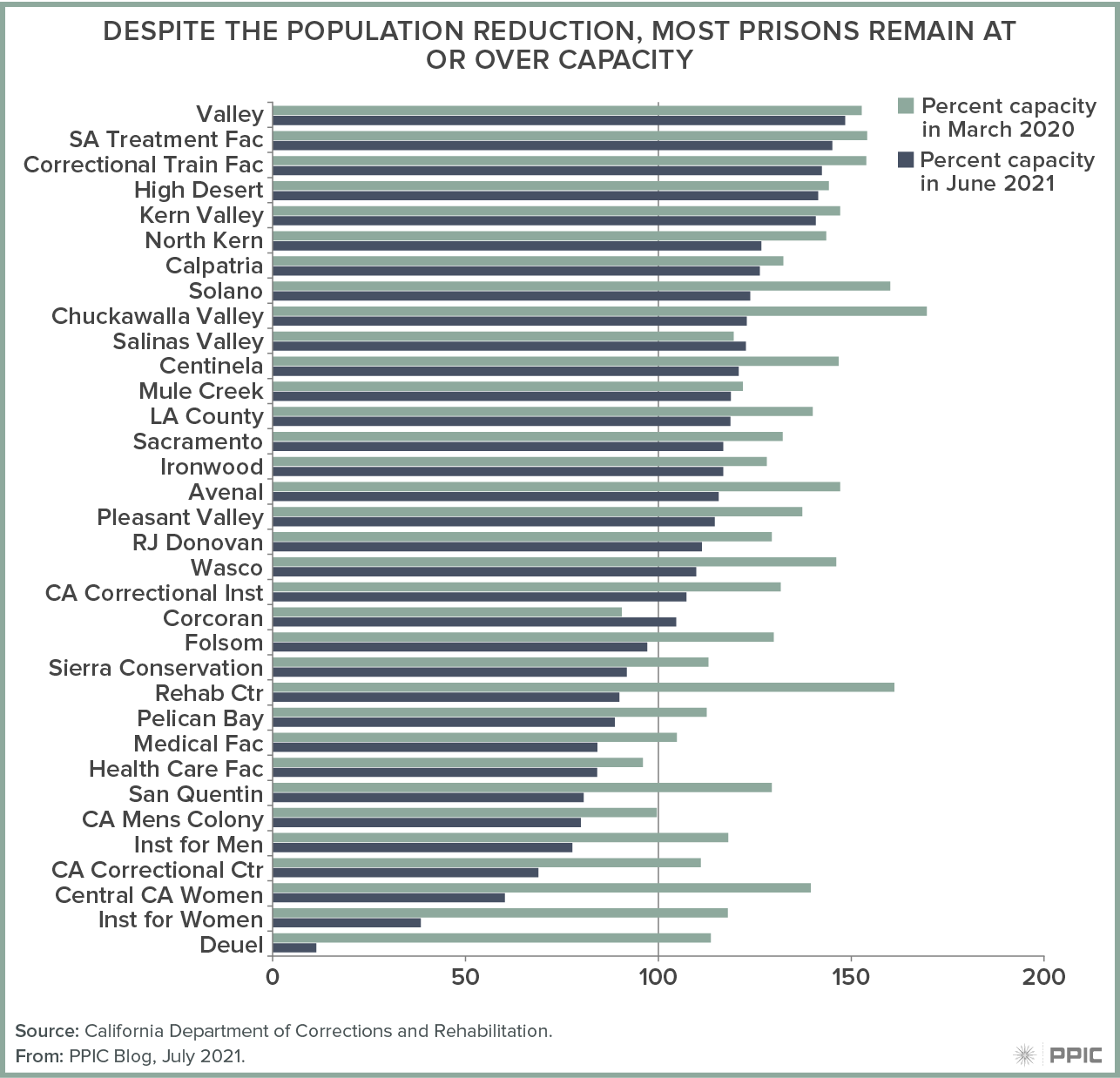 In recent months, vaccines have emerged as the primary defense against further virus proliferation. In prisons, where COVID-19 spreads easily and large proportions of prisoners have medical conditions that put them at high risk of severe infections, vaccinations may have particular lifesaving potential.

Prisoners seem to acknowledge the threat the coronavirus poses and have largely chosen to get vaccinated. Across prisons, prisoner vaccination rates currently range from 51% to 88%, with an average of 71%—10 percentage points higher than the statewide rate. Direct experience of the harm the virus can cause may have motivated many prisoners to get their shots. Higher prisoner vaccination rates are strongly associated with higher prior COVID-19 infection rates across prisons. 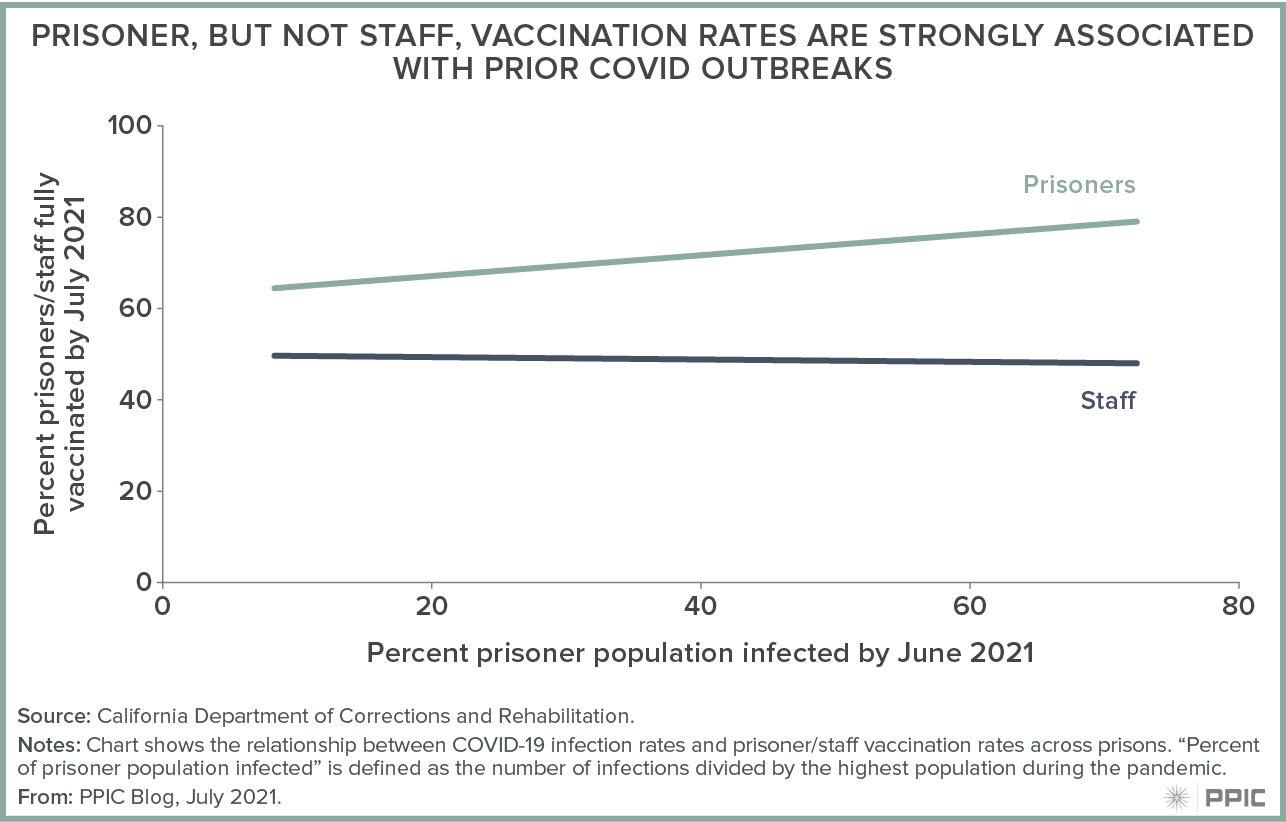 The overall decline in the prison population has prompted the closure of two prisons near Tracy and Susanville. The recent influx of thousands of prisoners coupled with depopulation in preparation for these closures may increase crowding in other prisons. As the state continues to adapt to the pandemic and emerging variants, a rise in overcrowding—alongside insufficient prisoner vaccination rates in some prisons and widespread staff reluctance to get their shots—may prolong the threat the virus poses in the state’s prison system.