Heather Harris June 12, 2020
NEVER MISS AN UPDATE!
Sign up for our blog alerts to receive insights from PPIC by email.

The COVID-19 crisis triggered an eight-week moratorium on prison admissions that helped reduce California’s prison population to a level not seen for more than 25 years. On May 26—as demonstrations decrying police violence and systemic racial inequality spread across the nation—California resumed admitting prison inmates.

Resuming admissions without also accelerating prison releases could reverse the latest reductions in prison population, and further increase overcrowding in an environment challenged by a deepening COVID-19 outbreak. In the weeks since May 26, when the suspension was lifted, the number of actively infected prisoners increased by nearly 150%— from less than 1,000 cases to more than 2,400 cases.

Admissions to prisons within the California Department of Corrections and Rehabilitation (CDCR) had been halted March 24 on orders from Governor Newsom. Between the end of March and the end of May, the prison population dropped by 5,766 inmates—from 117,328 to 111,562—including those in camps. California has not seen numbers this low since 1993—prior to the passage of Proposition 184 in 1994, which enacted California’s three strikes law and hastened the rise in the prison population. 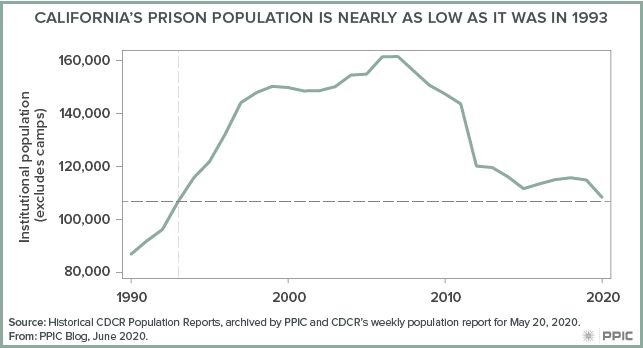 Releases in April and May also helped reduce numbers, but to a lesser degree. When the prison population is relatively stable, the number of releases keeps approximate pace with admissions. Last year the population hovered between 117,000 and 118,000 inmates. Prior to the pandemic, an average of 700 inmates entered California’s prison system weekly. Without the moratorium, prisons would have admitted about 5,600 new inmates over the past two months. Therefore, about 5,600 people should have been released over the same period.

In the first three weeks after the March order, releases seemed to far outpace the estimated average, with 4,688 inmates released—or about 850 more per week than projected. Then releases slowed: CDCR released about 350 fewer inmates per week than estimated, or 1,778 inmates in the ensuing five weeks. In total, 6,466 inmates were released over eight weeks, just 866 more than the estimated average. 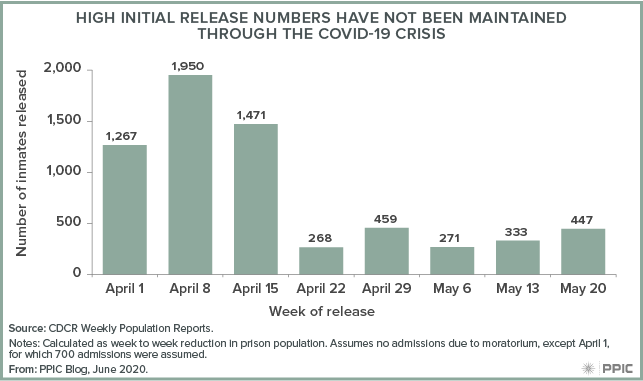 Despite efforts to release some inmates sooner, the California prison system remains overcrowded. The week before the moratorium expired, the prison population stood at 124% of capacity. Maintaining this population level may prove challenging as admissions resume because the plan to transfer inmates from county jails to prison is quite ambitious.

About 3,500 county jail inmates are to be transferred to CDCR within one month, 175 more per week than the pre-pandemic average. Although admission rates will likely fall thereafter, to keep the prison population at its current level about twice as many inmates must be released over the same four weeks as were released during the five weeks that ended on May 20.

Releasing that many inmates may be difficult as parole readiness undergoes greater scrutiny to protect public health. However, missing that goal will increase overcrowding, which could deepen the threat COVID-19 already poses to the health of prisoners and prison workers.