The COVID-19 pandemic has spurred reports of Californians taking advantage of the flexibility of remote work to flee the Golden State’s high cost of living. The Census Bureau released total population numbers for California today, and they do suggest a significant slowdown in the state’s population growth. But these numbers do not include the last half of 2020, and they do not tell us why population growth has slowed. We won’t have official census counts of this information for many months. But we do have population estimates from the California Department of Finance through the first few months of the pandemic. What do they suggest about how California’s population has changed?

The state’s population growth has been slowing for at least 20 years, but growth came to an effective stop between 2019 and 2020, increasing just 0.05%. 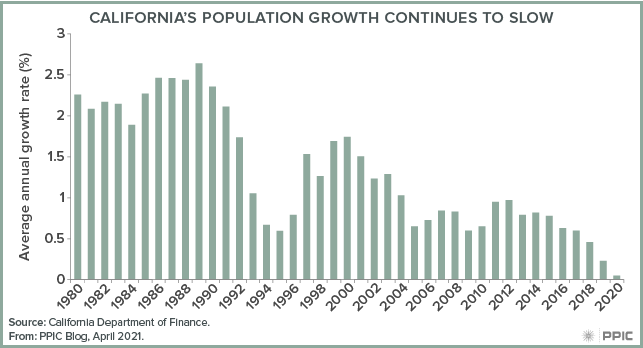 Demographers break population growth into natural increase—births minus deaths—and net migration—the flow in minus the flow out. Recent trends are being driven by slowdowns in both categories: the state’s population is aging as its birth rates decline, and net migration has turned negative in the past few years, after almost a decade of growth. CDC data shows that deaths accelerated dramatically in the second half of 2020 during the strongest COVID surge, and births are also down. The CDC’s July 2021 report may show that natural increase—which has been slowing down for many years—took a sharp downturn during the pandemic. 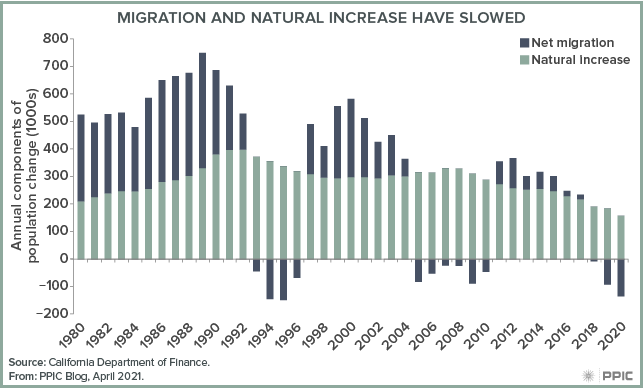 Net migration can be divided into international and domestic flows, and most of the recent migration shift is domestic: a function of residents leaving California for other states. While immigration from other countries has declined, it has not changed nearly as much. Nor are these patterns really new. In most of the past 30 years, domestic migrants moving to other states have been replaced by immigration from other countries. What is relatively new is a domestic outflow large enough to be a drag on the state’s overall population growth, with net outflows of about 170,000, 240,000, and 260,000 in each of the past three years. 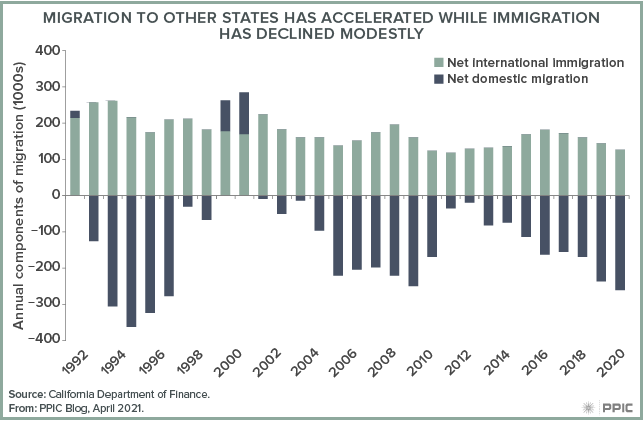 Again, these numbers cover only the first half of 2020. And while migration in and out of the state is important, most movers—upwards of nine in ten—move from one part of the state to another (and most move within their local areas). But the numbers do confirm a growing domestic outflow over the past decade. PPIC will monitor new data releases as a fuller picture of 2020 comes into focus.