Across California, thousands of high school seniors are in the process of completing college applications. If recent trends continue, the number of applications this year should be staggering. Keeping up with demand has been a challenge; most colleges have reduced their admission rates in the face of large increases in student interest.

California colleges and universities garner the most applications in the nation. Of the top 10 most popular schools in the country, eight are in California (six UC campuses and two CSU campuses). UCLA has led the nation in applications every year for at least the past 17 years. In 2017, it became the first college in the country to receive more than 100,000 freshmen applications. 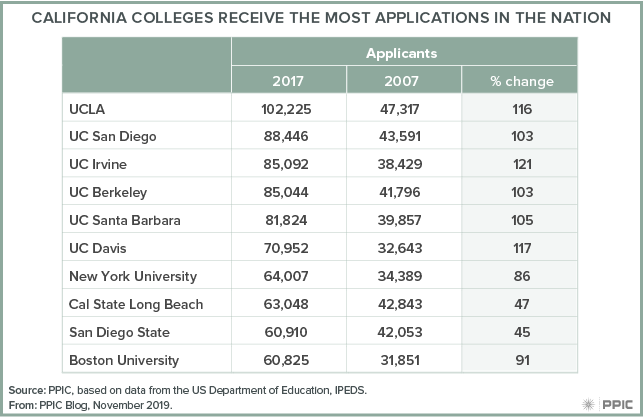 In the CSU system, Cal Poly San Luis Obispo has moved to 18th from 23rd. And even though other CSU campuses fell in the rankings, they still experienced large increases in applications.

Of course it makes sense that California colleges would lead the nation: the state has more high school graduates than any other and offers a robust system of public universities. And students are applying to more colleges than they did in the past, which contributes to the growth in applications.

But much of the increase is attributable to improvements in college preparation. Between 2007 and 2017, the number of California high school graduates completing the courses required for UC and CSU eligibility increased by almost 60%. In 2007, only about one third of high school graduates completed the required college preparatory courses, but by 2017 almost half had done so, a remarkable improvement in a relatively short time.

Unfortunately, California’s public universities have not been able to accommodate all qualified applicants. In fact, they lead the nation in turning applicants away. 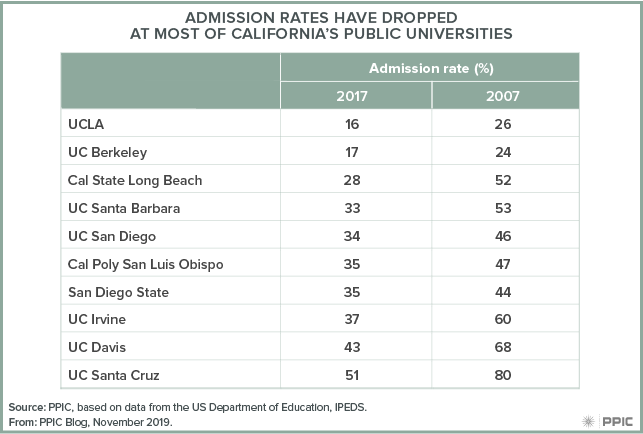 Each of the UC campuses except Merced are unable to admit all of the eligible students who apply. Seven CSU campuses (including Long Beach, San Diego, and San Luis Obispo) are impacted for all undergraduate programs, meaning they cannot admit all qualified applicants; all but one of the other campuses are impacted in certain majors. Both UC and CSU refer qualified applicants to campuses that have more room, but more needs to be done to expand capacity at campuses with high demand.