College Graduates Have Higher Net Worth

Hans Johnson July 12, 2017
NEVER MISS AN UPDATE!
Sign up for our blog alerts to receive insights from PPIC by email.

But what about wealth? Wealth is one of the most important indicators of economic well-being, but it is difficult to measure and therefore information on wealth is much less widely available. Using recently released data from the US Census Bureau’s Survey of Income and Program Participation (SIPP), PPIC has developed new estimates of wealth for Californians. We focus on household net worth, the difference in value between all assets (including retirement accounts, savings accounts, investments, and real estate) and all liabilities (including mortgages, loans, and credit card debt). 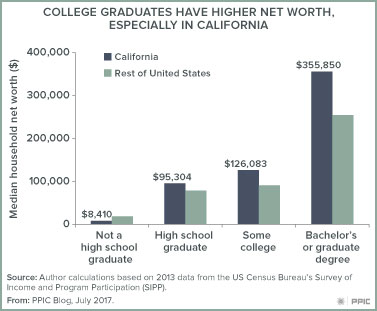 The estimates show that Californians are wealthier than adults in the rest of the nation. In 2013, median household net worth among adults age 25 and over was $135,000 in California compared to $105,000 in the rest of the United States. While many have expressed growing concern about income inequality, the distribution of wealth is even more uneven—a fact that is especially apparent when we examine wealth by educational attainment. In California, median household net worth is almost four times higher for adults with at least a bachelor’s degree ($356,000) than for high school graduates ($95,000). (In the rest of the nation, the difference is slightly more than threefold.) One in four college graduates in California is a millionaire, compared to one in fourteen high school graduates. 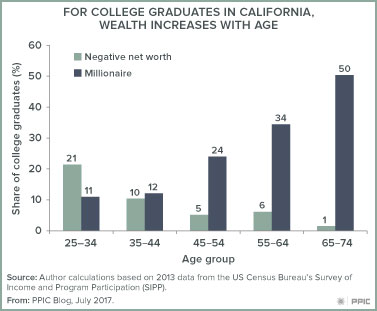 Higher education has long been key to economic progress for individuals and for the state. In future research, PPIC will explore the role of higher education in promoting social and economic mobility. Ensuring that higher education continues to put people on the path toward economic well-being is a central policy issue.