Communicating to California’s Seniors about Coronavirus

Older adults are especially vulnerable to the coronavirus (COVID-19). Early data show that mortality rates among people age 60 or older are many times higher than among younger adults. Protecting this population is paramount to limiting the health consequences of the COVID-19 pandemic. In California, this means communicating information in ways that can effectively reach a particularly diverse older population.

California’s senior population is large and growing fast. In 2018 the number of older adults in California reached 8.0 million, up from 5.7 million ten years earlier, according to the American Community Survey. Today, one in five Californians is age 60 or over, a record high.

The rapid growth in the older population is not unique to California. Throughout the nation—as in most developed countries of the world—populations are aging rapidly. The aging of the very large baby boom cohort, declining birth rates, and increasing life expectancy have expanded the senior population.

What sets California apart is its diversity. People of color make up almost half (45%) of California’s 60 and over population, about double the share of the rest of the nation (23%). In California, Latino and Asian American populations make up relatively high shares. 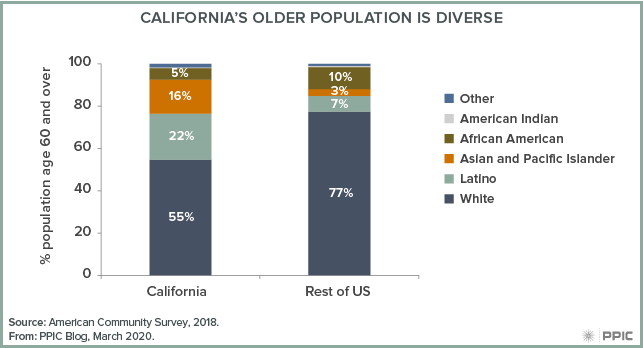 California’s older population is also diverse in terms of language: 37% of older Californians speak a language other than English at home, compared to 13% in the rest of the nation. While Spanish predominates among non-English speaking households, dozens of languages have at least 10,000 speakers. Among the 2.9 million Californians who do not speak English at home, 1.2 million are not proficient in English (speaking only some or no English). 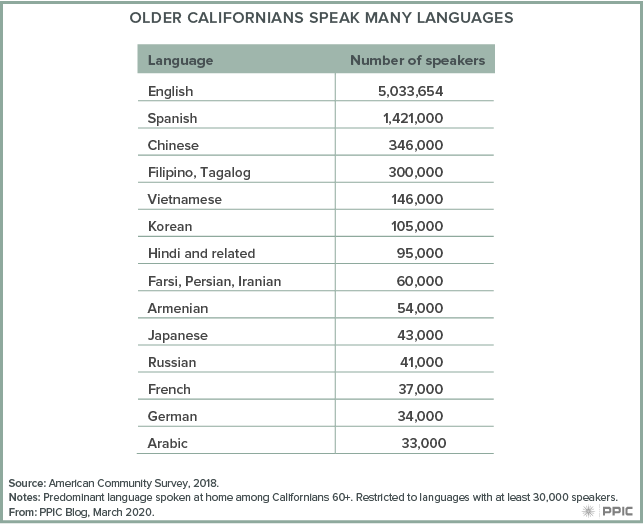 The vast majority of older adults live in the state’s large metropolitan areas—Los Angeles, Orange, San Diego, and Ventura Counties, along with the Bay Area. But in some lightly populated rural counties, they make up one-third or more of the population. These counties, in the far northern part of the state (Modoc, Trinity, and Siskiyou) and in the Sierra Nevada (Alpine, Amador, Calaveras, Mariposa, Nevada, Plumas, Sierra, and Tuolumne), could face acute local health care challenges.

It is essential that health services and public health messaging in California consider the state’s diverse population of older adults. Culturally and linguistically appropriate public health announcements, news, and services will help ensure that all Californians in all regions of the state have up-to-date information on the novel coronavirus and steps they can take to protect themselves and lessen its spread.

To Speed Up Vaccine Distribution, Improve Broadband Access among Seniors