President Biden and congressional Democrats have begun an effort to pass a comprehensive immigration reform bill. The proposed legislation includes a pathway to citizenship for the nation’s roughly 11 million undocumented immigrants. An immigration overhaul would be a big deal for California, which is home to about a quarter of this undocumented population. Among other things, it could help narrow a longstanding “exclusive electorate” gap between those who vote and those who do not. 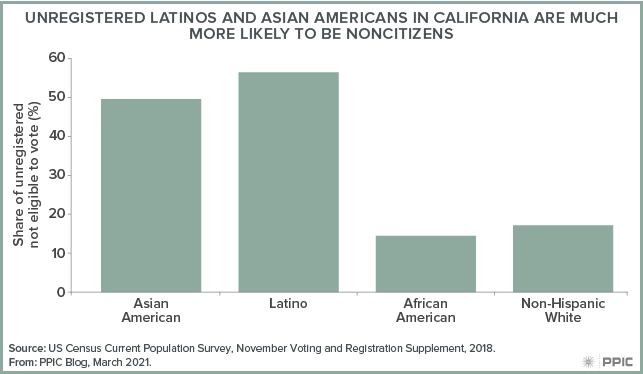 Many documented immigrants can apply for citizenship and become voters. But about half of California’s noncitizens are undocumented and so can never vote under current law. Almost eight in ten of these residents are Latino, and about two in three have also been in the country for more than a decade, making them effectively permanent residents. Ironically, the state’s recent success at registering new voters may have further concentrated nonvoting among this population: undocumented immigrants may now account for a third or more of unregistered California adults.

An immigration overhaul would not produce an instantly different electorate. The pathway to citizenship laid out in the draft bill would take at least eight years, and many of those who became citizens might not choose to vote. Despite the current surge in refugees at the border, the flow of new undocumented immigrants has slowed to a trickle in recent years, and the native-born children of Asian and Latino immigrants are coming of age and registering to vote. Half of California children now have at least one immigrant parent, so the electorate will become more diverse no matter what happens on immigration reform.

Ultimately, the prospect of reform raises the question of how the nation views the undocumented immigrants who are here now. In the January PPIC Statewide Survey, Californians overwhelmingly supported (87%) allowing undocumented immigrants to remain in the country. The specifics have not been worked out, and it is possible there will be no reform at all. But if a path to citizenship is offered, it would open the door to joining the California electorate for millions of California residents.

California’s Exclusive Electorate: A New Look at Who Votes and Why It Matters

Vote-by-Mail and Voter Turnout in the Pandemic Election