Public safety is one of many areas of life being affected by the COVID-19 pandemic. Now that most Californians are staying home in response to the statewide shelter-in-place order, the overall number of reported crimes is declining in four of the state’s largest cities. But there is also evidence of an uptick in some types of crime.

We examined the daily reported crime numbers for two large Southern California cities and two Bay Area cities: Los Angeles, San Diego, San Francisco, and Oakland. It is important to note that while these cities make their data quickly available for analysis, the numbers are preliminary: law enforcement agencies update and review the data before submitting them to DOJ as official statistics. Also, we do not yet have data on other cities or rural areas across the state. And, finally, it is possible that our highly unusual circumstances are affecting the extent to which crime is reported.

Comparing the average weekly number of reported crimes in February to the number reported for the last week in March shows an overall drop from about 6,150 to 3,620—a decrease of 41%. Declines have been particularly large in the two Bay Area cities: about 69% in Oakland and around 55% in San Francisco. Crime reports began to fall in all four cities a few weeks before shelter-in-place orders were issued for the Bay Area (March 16) and the state (March 19)—after employers started urging their workers to stay home.

Property crime accounts for roughly 80% of the overall decrease: reports fell from a weekly average of 4,270 in February to 2,270 in the last week of March (a drop of about 47%). This trend was driven by a decline in larceny reports, particularly car break-ins. The drop in larcenies, which are most striking in the Bay Area, could quite possibly be largely attributable to the absence of tourists. 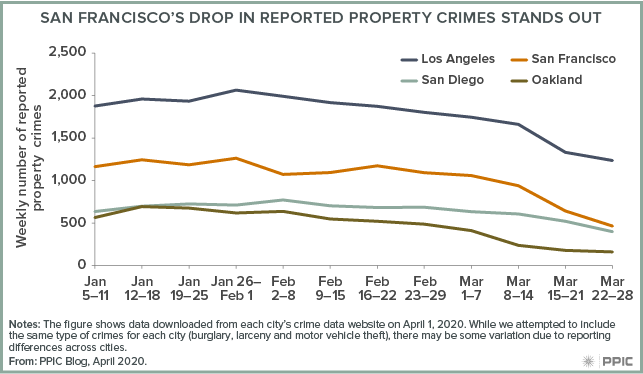 Overall reports of violent crime dropped from a weekly average of about 1,880 in February to about 1,360 in the last week of March—a 28% decrease. Oakland experienced the most dramatic drop—from about 200 to 70. The number of reported assaults dropped from 1,430 to around 1,100 (22%). The overall decrease in robberies—from about 350 to 260—was driven largely by the Bay Area. 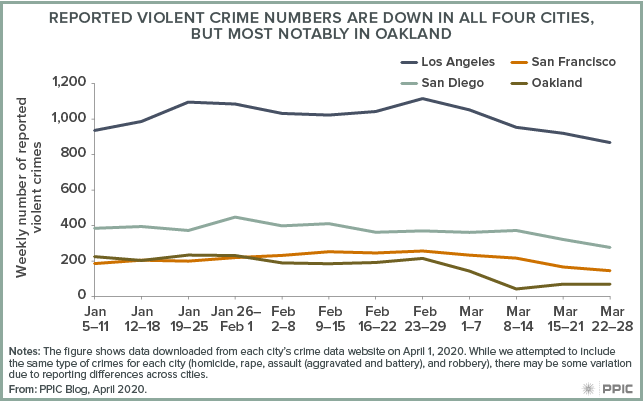 There are some notable exceptions to this downward trend. While reports of domestic violence are down overall for the four cities, Los Angeles saw an uptick in the last two weeks of March, and the weekly number of reported robberies in San Diego were also up somewhat. More broadly, a slight increase in reported commercial burglaries across all four cities suggests that burglars may be shifting from residential to commercial targets now that so many people are at home at all times of day.

It is too soon to draw firm conclusions about recent trends, but it will be important to track and monitor crime data so that we can identify vulnerabilities in our communities and determine whether new approaches are needed to maintain public safety in these challenging times.