Preliminary data from four of California’s major cities—Los Angeles, Oakland, San Diego, and San Francisco—show increases in property and violent crime numbers this past year. In particular, the troubling increase in homicides that we saw in 2020 appears to continue—homicides in these cities are up by about 17% in 2021. The increase in property crime in 2021 was driven by car break-ins and auto thefts. While this news is disconcerting, it is worth noting that overall reported violent and property crimes are now similar to pre-pandemic levels; property crime was at a historic low in 2020, and violent crime was relatively low as well, similar to levels of the late 1960s.

We examined reported crime numbers for Los Angeles, Oakland, San Diego, and San Francisco between January 1, 2020, and October 31, 2021. It is important to note that while these cities make their data quickly available for analysis, the numbers are preliminary: law enforcement agencies update and review the data before submitting them to the Department of Justice as official statistics. Also, we do not yet have data on other cities or rural areas across the state for 2021. And, finally, it is possible that the highly unusual circumstances of the pandemic are affecting the extent to which crime is reported.

Comparing January–October 2020 to the same period in 2021, violent crimes increased by 5%, ranging from close to 17% in Oakland to about 1% in Los Angeles. In the first few months of the pandemic, the monthly number of violent crimes dropped notably; it then rose to pre-pandemic levels by fall 2020 and declined again until early 2021. After that, violent crime increased from about 8,000–8,500 per month to around 9,500–10,000, where it has stayed since July 2021. While there were more reported crimes for all four violent offenses (homicide, rape, robbery, and aggravated assault), about three-fourths of the overall increase in violent crime stems from aggravated assaults, the most common violent offense. 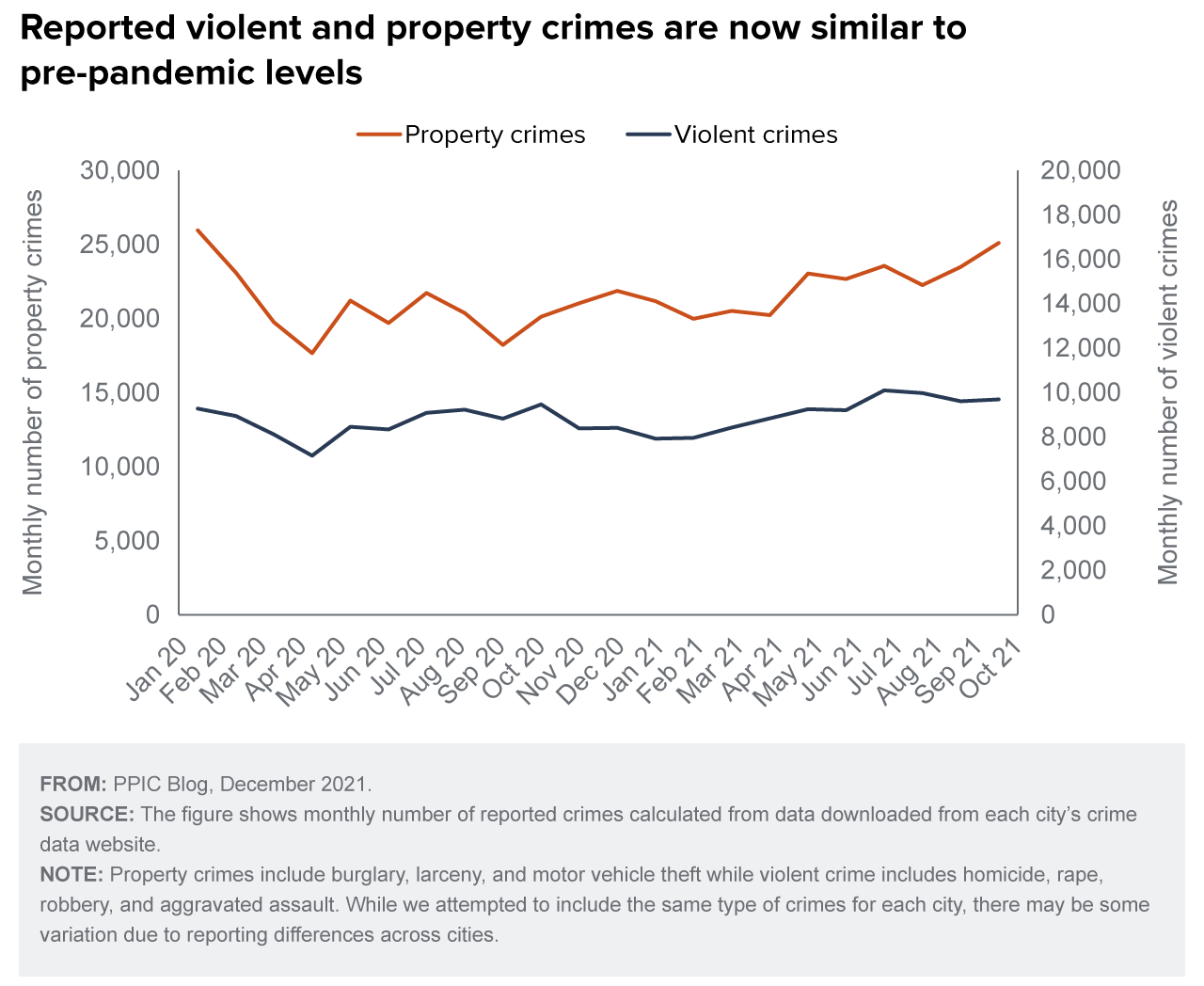 While homicides and aggravated assaults continued to increase in 2021, the numbers have been lower in more recent months. The number of homicides in January–October increased 17%, from 523 in 2020 to 613 in 2021. All four cities saw increases in homicides (Oakland 38%, Los Angeles 17%, San Diego 11%, and San Francisco 5%). Aggravated assaults also went up in all cities, by slightly more than 4% overall. 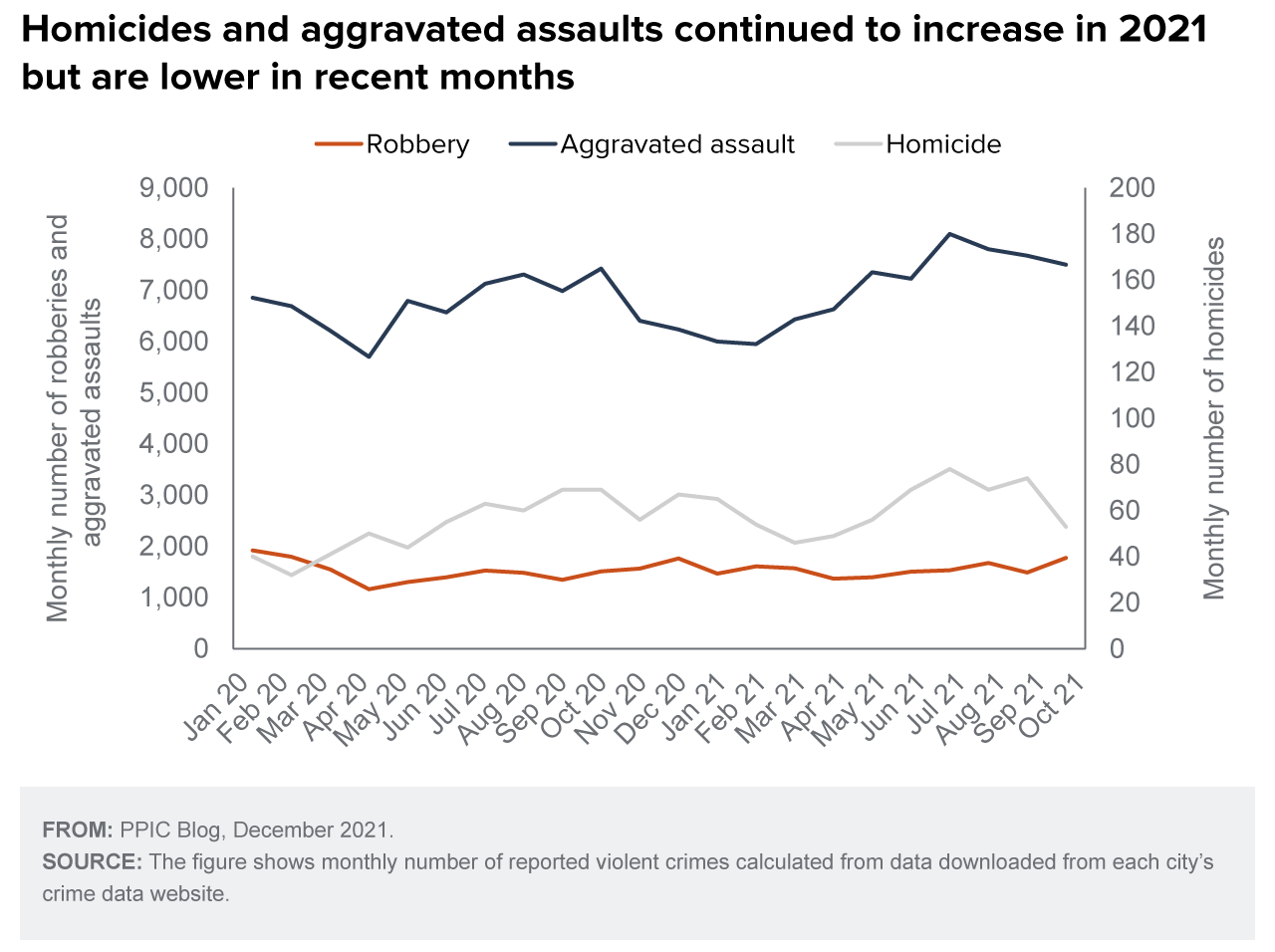 In 2020, property crime in California reached the lowest level since 1960 (as far back as consistent crime statistics go), but in 2021 property crime in these four cities trended upward. Property crime rose nearly 7% (ranging from about 3% in Los Angeles to 13% in Oakland), when comparing the first ten months of 2021 and 2020. After hovering around 20,000 reported property crimes per month in early 2021, the numbers have increased, reaching 25,000 in October, the highest monthly total since the beginning of the pandemic—and roughly the same number as before the pandemic. 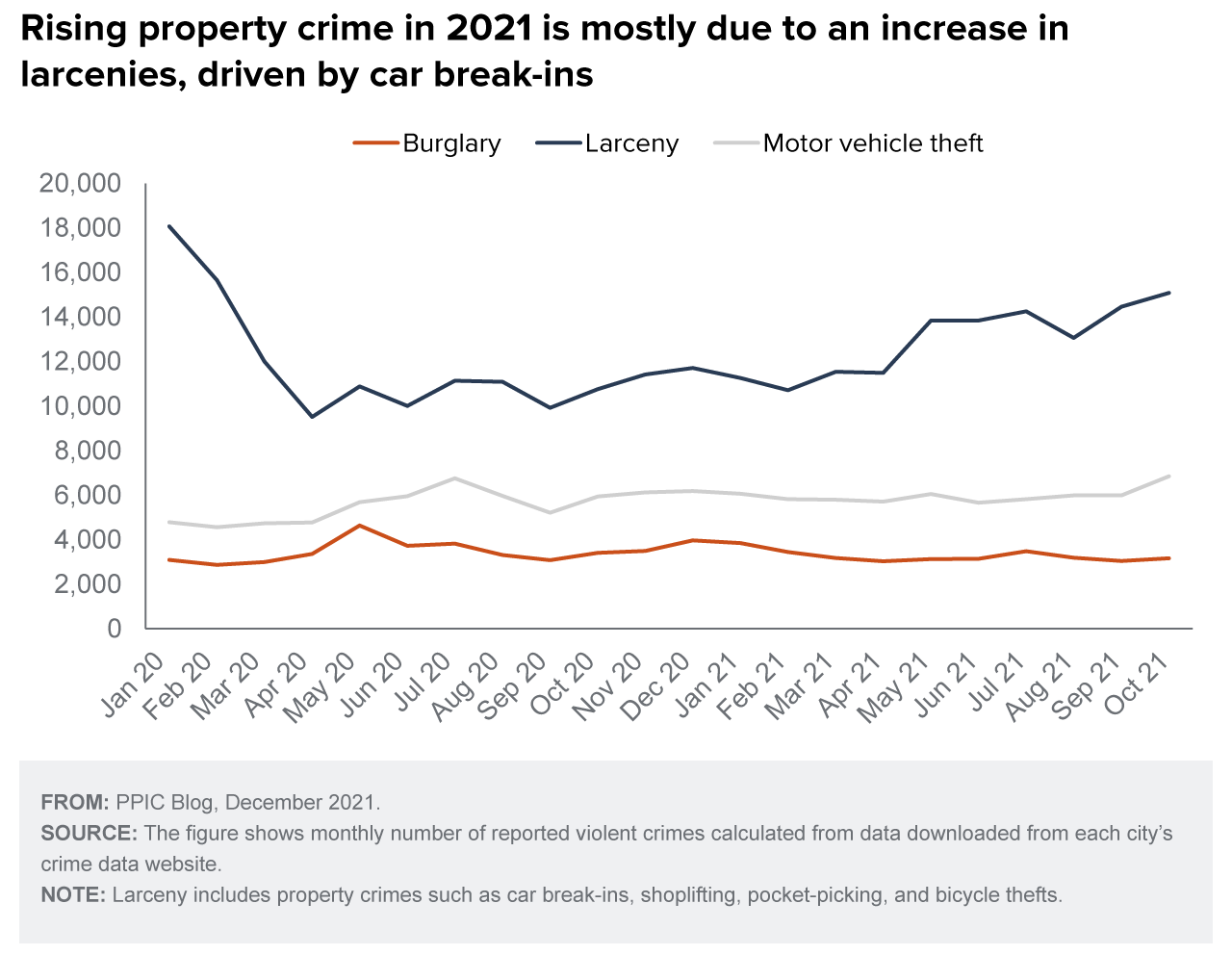 While the specific factors driving fluctuations in crime numbers in the wake of the COVID health crisis are very difficult to determine, the data suggest that overall both violent and property crime are back to pre-pandemic levels. The notable and troubling exception is homicides and aggravated assaults: after increasing in 2020, these crimes appear to have risen in 2021 as well. Closely monitoring crime trends remains essential, including exploring whether the decline in homicides and aggravated assaults in recent months will continue and determining the contributing factors behind these changes in crimes.