The number of high school graduates has remained steady for several years, with no expectation of significant increases any time soon. And yet demand for admission to the state’s public universities continues to grow.

A quick look at trends among California’s high school graduates—in particular, their preparation for college—helps explain this paradox. Other sources of enrollment growth, including increases in transfer students and improved retention, also play an important role. Understanding these trends is critical, since annual state funding for the University of California (UC) and the California State University (CSU) depends partly on anticipated enrollment growth.

By 2017–18 (the most recent data available), almost half (49%) of California’s high school graduates had completed the A-G courses, a remarkable increase from just ten years earlier when only about one-third (34%) did so. As a consequence, the number of high school graduates eligible for UC and CSU has reached record numbers. 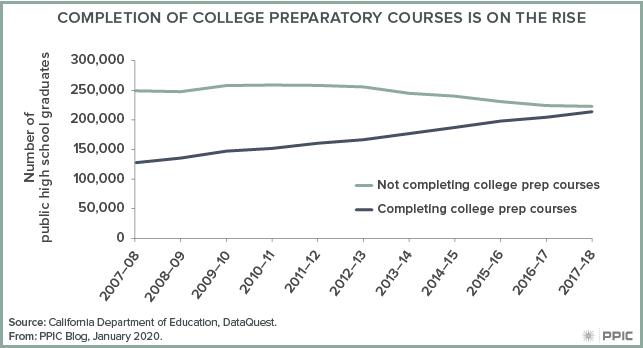 Of course, enrollment demand depends on more than just new freshmen. The number of students that transfer from the state’s community colleges also adds to enrollment growth. Over the past five years, that number has also grown (up 25% at UC and 14% at CSU).

Accommodating this enrollment growth is good for the state. College graduates are in high demand in the state’s labor market and—on average—earn far higher wages than less educated workers. PPIC has projected that demand for highly educated workers will keep growing as the state’s economy continues to change. Finding ways for California students to attend and graduate from college improves their well-being—and that of the state.