Voter registration has surged in California. The California Secretary of State reports 85% of eligible Californians are on the voter rolls, an unprecedented 11% increase from the same point in 2016. The drama of national politics in recent years has stoked interest in the election, leading more Californians to register. At the same time, the California New Motor Voter (CNMV) Act, implemented in 2018, may play a role because DMV customers must engage with voter registration to complete certain transactions.

In the last year, however, the remarkable pace of registration slowed. Most of the increase had occurred as early as a year ago. The registration rate has risen 4 percentage points since then, but it did the same over a similar period before the 2016 election. It seems the CNMV registration machine is no longer producing the same results.

Could COVID-19 be partly to blame? The crisis forced the DMV to close its field offices and extend deadlines for in-person transactions. All field offices were closed from March 27 through May 8, and full operations were not available until June 26. While some services moved online, closures still sharply limited access to the CNMV opportunity.

In the figure below, we track registration activity in the 2016 and 2020 presidential elections, centered around each year’s primary. The 2020 primary fell on March 3. The shaded gray area marks the weeks when driver’s tests were cancelled due to COVID-19, about three weeks after the primary. During that time, most field offices were completely closed.

Signs that the DMV shutdown mattered are mixed. Registrations did peak with the 2020 primary and then fall off quickly, but the steepest drop came before the DMV shut down. More to the point, the pattern for 2016 looks similar—despite the absence of either CNMV or a pandemic. (The numbers are otherwise comparable because the state’s population hasn’t grown much since 2016.) So the good news is that, at least in terms of average weekly counts, the state’s registration is no worse off under COVID-19 than it was four years ago. 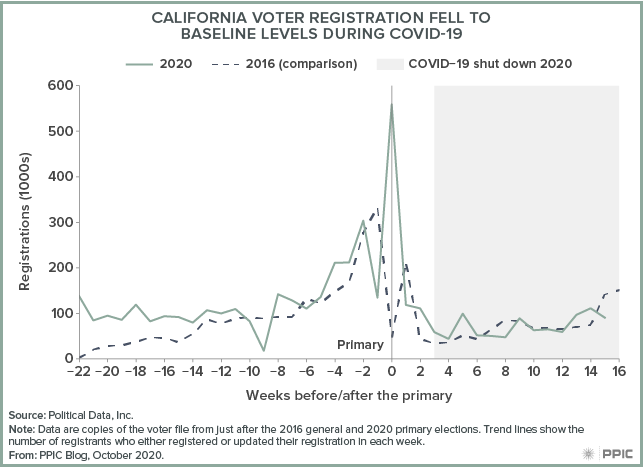 Nonetheless, there are hints that CNMV would have contributed more to the voter rolls without the virus. When the primary was still months away (the far left of the graph), registration activity was higher in 2020 than in 2016. Over that period, CNMV registrations accounted for almost 60% of the total. Under the DMV shutdown, CNMV registrations fell to just 25%.

Voters are interested in this election—87% are following it very or fairly closely in the latest PPIC Statewide Survey—and that interest has clearly driven higher registration numbers. But the numbers would probably be even higher without COVID-19. The DMV shutdown closed off an easy registration option that had been a source of registration activity in the months and years before.

Voter Registration Is Up Sharply, as Is Partisanship