How Did California’s Voter Registration Rate Get So High?

The most recent report on voter registration from the California Secretary of State offers startling news: the registration rate is now just above 80%, the highest it’s been before a primary election since World War II. With several months to go before the registration deadline, this rate is all the more remarkable considering the state’s population, which compared to other states is younger, more mobile, and less acculturated to voting—in part due to the high number of immigrants. As a result, eligible voters in California are especially challenging to mobilize.

What explains this incredible number? First, national politics has helped draw in new voters over the last decade. In the early 2000s, the state’s registration rate languished below 70%. Two presidential elections—the race between Barack Obama and John McCain in 2008, and the one between Hillary Clinton and Donald Trump in 2016—helped elevate that rate to about 76% heading into the 2018 election.

Second, the state implemented an important reform in April 2018. The California New Motor Voter (CNMV) program takes a fairly aggressive approach to registering eligible residents at the Department of Motor Vehicles. DMV customers getting a new driver’s license or state ID, renewing an existing one, or updating an address must now answer voter registration questions to complete their DMV transactions. If they don’t want to register they have to say so explicitly.

CNMV’s effect has been complicated. It has more than doubled the number of people registering at the DMV, from an average of about 140,000 per month to roughly 370,000. Yet most of these people were not new registrants. In fact, many aspects of registration in 2018 were unexceptional. The figure below compares the registration rate over time in every election cycle between 2008 and 2018. The rate already started higher in 2018—a consequence of the 2008 and 2016 elections. It then increased during the election season, but the increase was in line with previous years.

The real change has come since the 2018 election. In every past cycle, the registration rate has flattened or even fallen in the next calendar year. Excitement fades, and routine file maintenance removes more voters than the number who sign up. But an election doesn’t stop people from using the DMV, so under CNMV people have continued to register. The result is a steadily widening gap between registration now and registration at the same point in past cycles. 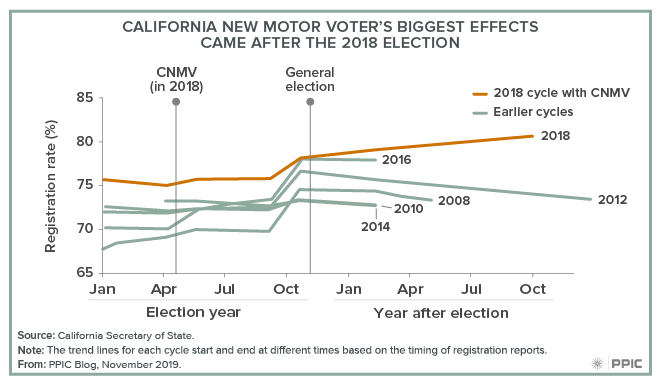 It’s not clear from this gap whether more people will register by the 2020 election than would have without CNMV. Americans already seem unusually excited about voting, and enthusiasm often finds its way to the ballot box. Yet higher registration is not the reform’s only potential effect. In pushing so many to fill out a voter registration form, CNMV also helps keep the registration file up to date. This avoids glitches on Election Day that could prevent someone from voting.

Ultimately, whatever the cause, the registration rate is up. This hints at a new future for California. Unregistered Californians have traditionally been younger and more diverse than voters, with different views on policy issues. As the registration rate climbs, more of these residents become part of the voting public. Politics may be forced to change in response.