Diversity in the California Statehouse

Jennifer Paluch December 17, 2020
NEVER MISS AN UPDATE!
Sign up for our blog alerts to receive insights from PPIC by email.

The November election brought about an enormous set of national firsts when it comes to racial/ethnic diversity. Kamala Harris will be not only the first female but also the first African American and first Asian American vice president, and the 117th US Congress will be the most diverse to date. However, California’s congressional delegation (which is 62% white) has a way to go before it reflects the racial/ethnic diversity of the state population. California state legislators are also disproportionately white, but there have been recent signs of change.

Change has been slow: chamber rosters included only 16 state legislators of color as recently as 1990, while the 2020 election brought the number to 55 (out of 120). Racial and ethnic diversity differs across party lines: 46% of Democratic state legislators identify as white, compared to 79% of Republicans. And the assembly has historically been more diverse than the senate. The first African American assemblymember, Frederick M. Roberts, was elected in 1918, and the first California Native American, James C. Ramos, was elected in 2018. In the 1960s, Alfred Song-was the first Asian/Pacific Islander elected to both the assembly (1962) and the senate (1966); and Phil Soto and John Moreno, both elected in 1962, were the first Latino assemblymembers in modern history. 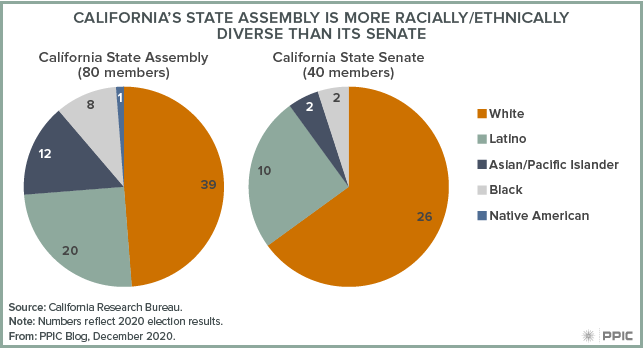 Diversity matters at all levels of government. It brings more perspectives and experiences to the delivery of services and the development of policies. It is also important to inspire future leaders and change-makers who see themselves in the faces of their representatives, so that diverse viewpoints and ideas continue to enrich public debate and produce better-informed policies.