When Californians go to the polls in March, they will not only cast a vote in the presidential primary—they will also vote on an education bond to fund construction and modernization projects. Given differences in support for the bond across the state’s regions and demographic groups, turnout will play a pivotal role in whether this measure passes.

In the closing days of the legislative session, the legislature passed and the governor later signed a bill placing Proposition 13 (the Public Preschool, K–12, and College Health and Safety Bond Act of 2020) on the March ballot. If approved by voters, the measure would authorize $15 billion in general obligation bonds to pay for the construction and modernization of California’s public schools, community colleges, and four-year colleges.

The September PPIC Statewide Survey took an initial look at support for this proposition. While two-thirds of Californians (66%) are in favor, 54% of likely voters say they would vote yes—just slightly above the majority needed to pass.

Are some Californians more likely than others to support the bond measure? Unsurprisingly, there is a wide partisan divide, with three in four Democratic likely voters (76%) saying they would vote yes compared to just three in ten Republicans (29%). Overall, independent likely voters are divided (48% yes, 44% no). But among Democratic-leaning independents, nearly two in three (64%) are supportive.

Support varies across regions, with Los Angeles (59%) and San Francisco Bay Area (57%) likely voters expressing the most support, compared to about half of likely voters elsewhere in the state. 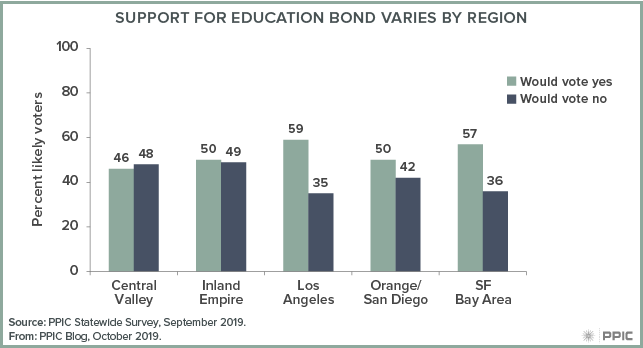 While support is similar among likely voters with (55%) and without (53%) children in the house, there are differences across other demographic groups.

White likely voters (47%) are much less likely than Latinos (74%) and those of other racial/ethnic groups (62%) to say they would vote yes. And since school construction bonds are often paid off by property taxes, it’s notable that homeowners (44%) are far less likely than renters (71%) to say they would vote yes. Support is higher among younger likely voters (66% age 18 to 44, 48% age 45 and older). It declines as education and income levels increase. 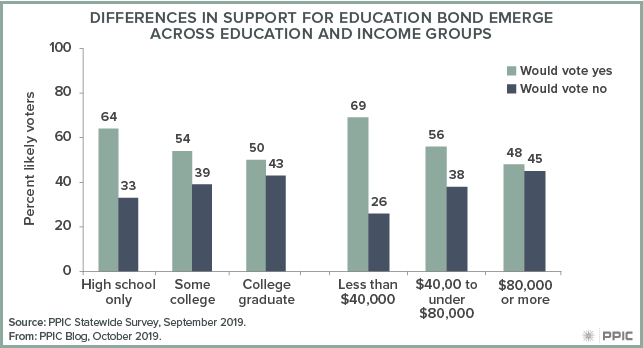 Overall, support for the education bond currently hovers at around half for likely voters, but there is much stronger support among many regional and demographic groups—suggesting that passage could depend on who shows up to vote. If Democrats and Democratic-leaning independents turn out in large numbers for the presidential primary, that could affect the fate of this bond. Stay tuned to the PPIC Statewide Survey as we continue to track this measure in advance of the March primary.