Drought, wildfire, and climate change round out the top three environmental issues that most concern Californians.

When asked about the most important environmental issue facing the state, one in four Californians named water supply and drought. 63% say water supply is a big problem in their part of the state, and majorities feel it is a big problem regardless of their political affiliation or region. While California’s only in the second year of the current drought, we’re seeing a level of concern similar to the fourth year of the previous drought—highlighting the fact that the current drought came on much faster and hit wetter parts of the state harder than last time. 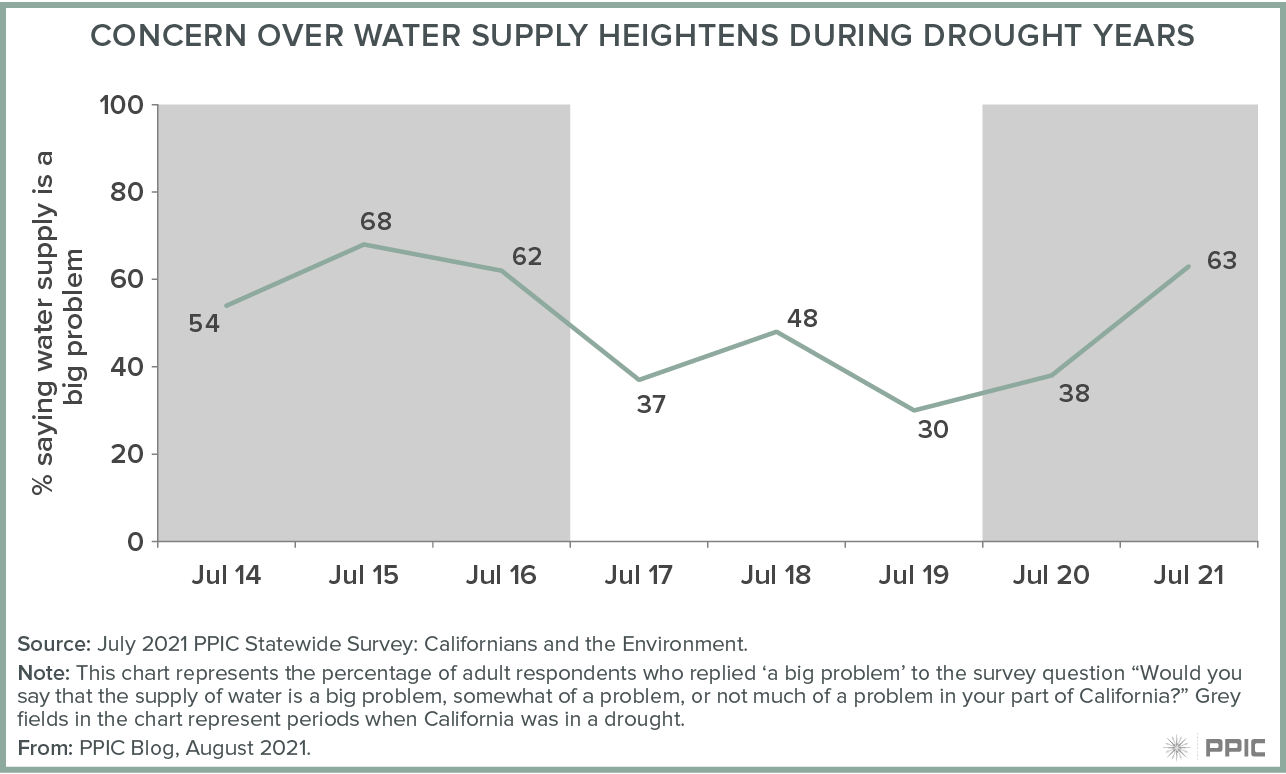 Five years ago, wildfires were one of the least-pressing environmental issues for Californians—just 2% said it was the most important environmental issue facing the state in the July 2016 PPIC survey—but today 17% view it as the most important, second only to drought and water supply. This share has been steadily increasing as wildfires have worsened in recent years. Over half of residents now see wildfires as a big problem in their region, including majorities across political leanings and demographic groups. This reflects the fact that wildfires affect not only those directly in the fire’s path, but also millions of Californians across all regions who experience poor air quality.

The third most-pressing environmental issue for residents is climate change (13%). According to 68% of adults, the effects of climate change have arrived, and 83% of respondents view climate change as a very serious or somewhat serious threat to the state’s economy and quality of life.

More Californians are linking the impacts of climate change to more severe drought and wildfires.

Although there are differences across party lines, there’s growing agreement that drought is linked to climate change. The July PPIC Statewide survey found that 80% of the state thinks that climate change has contributed to our current drought, a marked increase from 64% in 2015, the last time this question was asked in a PPIC survey. A similar share (78%) also say climate change is contributing to California’s recent wildfires, up from 63% in 2019, when the survey first asked about this topic.

This shift in public perception reflects the state’s environmental reality. The warming climate is exacerbating California’s drought conditions and threatening the snowpack. The current drought is leading to stressed ecosystems, depleted reservoirs, hard-hit farms and rural communities, and threats to urban water supplies. PPIC research suggests that around 2,700 wells could go dry this year in the Central Valley, and nearly 1,000 more next year if dry conditions persist. Impacts are already being felt across the state.

Extreme wildfires also may be changing public perceptions of climate change. During last year’s fire season, residents saw a record-breaking 4.2 million acres burn. Drought and wildfires can be tied to California’s warming and more variable climate, which is making both more frequent and intense.

There is an appetite for climate action.

Californians went into this drought using about 16% less water than they were using before the last drought. According to the July PPIC survey, a majority report they have started saving water again: 41% said they have done a lot to reduce water use and 39% have done a little. Still, two in three would like to see their government and communities do more to address the drought.

There is also widespread approval of carbon emissions reduction policies to address climate change. 74% support the 2030 target to reduce emissions to 40% below 1990 levels, a 6 percentage point increase from  five years ago. While there are strong partisan differences on some environmental issues (like banning the sale of all new gasoline-powered vehicles by 2035), others—like prioritizing the development of alternative energy sources and the Governor’s “30 by 30” conservation goal—enjoy bipartisan support, with majorities of Democrats, independents, and Republicans all in favor. 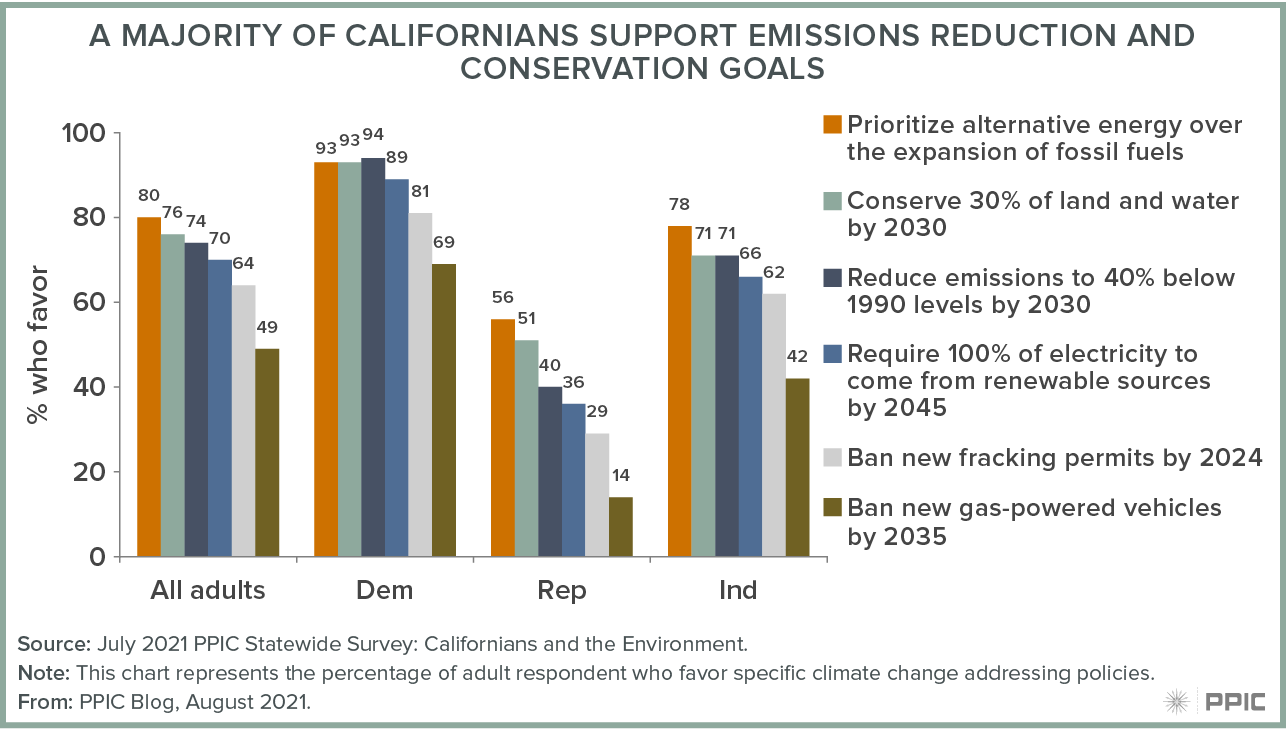 One piece of good news is that California is able to devote some of its budget surplus to boosting climate resilience and reducing greenhouse gases. The newly passed state budget  includes $15 billion in investments over multiple years to support action in both areas, and the legislature will continue to work on wildfire and climate spending when they return from summer recess in August. Though California faces very real challenges in a warming climate, the state is using its resources and policy tools to address residents’ concerns.