California’s unemployment rate jumped from a historically low 3.9% to 5.3% in March. For comparison, it took a full year from the official start of the Great Recession for unemployment to increase by 1.4 percentage points (although the levels were higher: 5.9% in December 2007 to 7.3% in December 2008). Notably, the March rate is based on data from the middle of the month, so it does not fully reflect the massive layoffs that occurred as the COVID-19 pandemic took hold.

Between March 15 and April 18, 3.4 million Californians applied for unemployment insurance. There has been much forecasting (including by us) about the sectors and workers that will feel the immediate effects of the downturn. We do not have demographic breakdowns and we don’t know which industries employed these workers. But recently released labor market data can provide some new insights.

By mid-March, California had recorded a net loss of 100,000 jobs, comprising about one-seventh the decline nationwide and reflecting the state’s early response to COVID-19 crisis. That’s less than 1% of the state’s 17 million jobs. The lion’s share of job loss (more than 80%) occurred in three service sectors: arts, entertainment, and recreation; accommodation and food; and “other services” (a category that includes automotive repair, personal care, and dry cleaning).

A comparison with the Great Recession highlights the severity of the current situation. Between February and March this year, employment in arts, entertainment and recreation fell 6.4%. Over the first year of the Great Recession, employment in this sector fell 1.6%. The number of jobs lost in the accommodation and food service sector was much higher between February and March, but these losses represented only 2.7% of the workforce in this much-larger sector.

A look at job losses in the industries that were hit hardest during the Great Recession shows that jobs are being lost much more quickly during the COVID-19 crisis. In the first month, construction—the recession’s most severely affected industry—saw a 2.2% decline, and no other sector experienced losses greater than 2%. 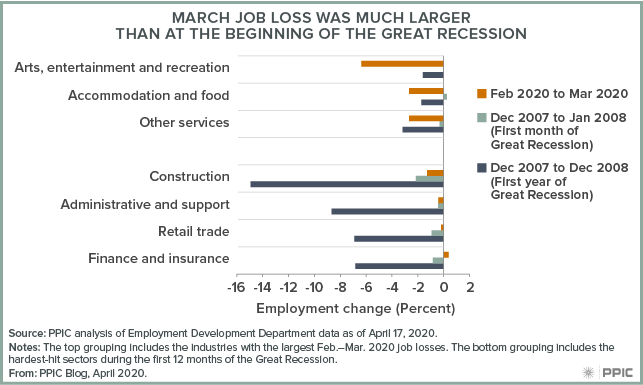 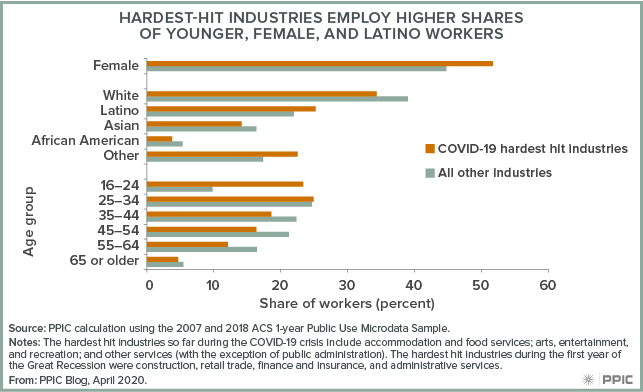 As the current crisis continues to unfold, a more complete picture of the workers and industries affected will emerge. The staggering number of recent unemployment claims indicates that the losses in the March data are only the tip of the iceberg. April data will no doubt show deeper declines and a widening impact across sectors.

Unemployment insurance will provide an important economic backstop for many workers over the next several months. However, it will be important to monitor the workers and industries being affected by this crisis, both to ensure that policy efforts are directed where they are most needed and to inform additional measures to mitigate the economic damage.

Glimmers of Hope for California in the April Jobs Report?