As Californians are learning about their new leader’s team and agenda, most give their support and have high hopes for President Joe Biden.

Biden currently enjoys broad approval in California. In the January PPIC Statewide Survey—which included 1,703 adults and was conducted during the 11 days immediately after the inauguration—70% of Californians approve of the way that Biden is handling his job as president. About six in ten or more across age, education, gender, income, and racial/ethnic groups and regions say they approve of Biden from what they know so far. Indicative of our hyperpartisan times, this includes 89% of Democrats and 65% of independents, but only 24% of Republicans. 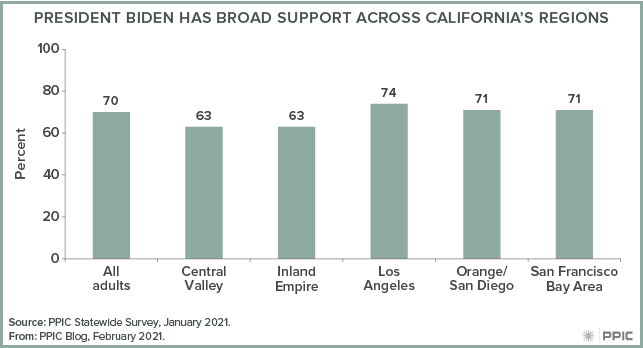 Biden fares well on top-of-mind concerns. Californians have been saying that COVID-19 is the most important issue facing the state since we began asking about it last spring. Today, 71% of Californians approve of the way that Biden is handling the coronavirus outbreak and, once again, solid majorities support him across demographic groups and regions. The partisan gap on this issue narrows somewhat, with 33 % of Republicans expressing approval, compared to 89% of Democrats and 67% of independents.

Remarkably, in the context of the pandemic, economic recession, political divisions, and amplified concerns about racial injustice that have surfaced in the past year, President Biden begins his term with 52% of Californians saying the US is generally headed in the right direction. Underlying this narrowly positive assessment are deep divisions along party lines (64% Democrats, 43% independents, 24% Republicans) and across racial/ethnic groups (64% Latinos, 54% Asian Americans, 41% whites, 40% African Americans). Still, the view that the US is headed in the right direction is much higher today than it was before the election (33% October 2020) and when President Trump entered office (36% January 2017). 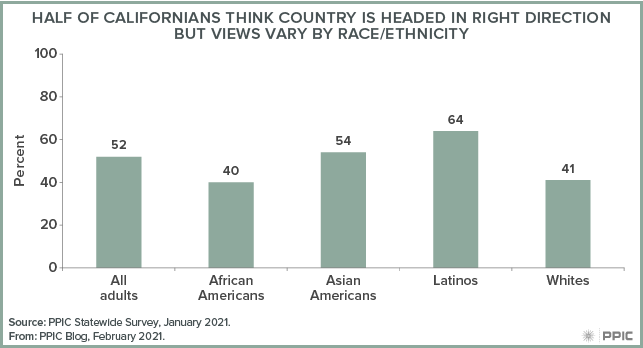 In sum, Californians are in a honeymoon phase with their new leader, and their positive views are buoyed by a majority (58%) saying the worst of COVID-19 is behind us. But Californians are aware of the political challenges in the wake of a contested election, another presidential impeachment, and the Capitol insurrection. Forty-four percent say the country will be able to unite behind Biden, who will accomplish a lot, while 51% say the country will be divided, and it will be hard for Biden to accomplish a lot.

In the coming months, PPIC will be monitoring President Biden’s efforts to address the COVID-19 crisis, related economic recession, and long-standing problems related to climate change, education, health care, immigration, and racial injustice. We will also be closely tracking the relationship between Californians and their government, with a keen interest in learning if current public opinion trends are temporary or the harbinger of a new political era.