The rumblings about a recall of Governor Gavin Newsom that began soon after he entered office in 2019 have gotten louder as California struggles with the COVID-19 crisis, along with related job losses and school closures. Recall efforts have two key steps: gathering enough signatures to qualify for a ballot and holding the recall election itself. Currently, the numbers appear to favor completion of the first step, but they are not close to supporting a successful recall of Governor Newsom.

Recall efforts are not new in California politics. In fact, they have been started for every California governor since 1960. But only one of those 54 efforts gathered enough signatures for an election—and in fall 2003, Democratic Governor Gray Davis was removed from office and replaced by Republican Arnold Schwarzenegger. A recall election this year is in the realm of the possible because the proponents have the money and extra time to collect the needed signatures. But it faces a steep uphill battle to succeed.

At the Public Policy Institute of California, we have been tracking the public’s opinion about California governors since 2000—from Gray Davis to Gavin Newsom. Since 2019, we have asked Californians 12 times about their view of the current governor’s performance. (“Overall, do you approve or disapprove of the way that Gavin Newsom is handling his job as governor of California?”) 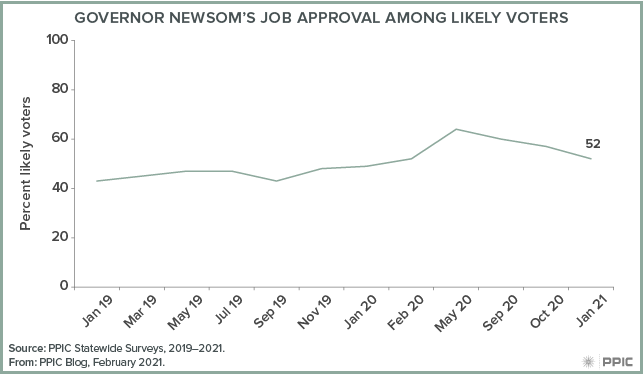 Today, partisans are deeply divided in their approval of Governor Newsom. Among likely voters, seven in 10 Democrats (75%) and almost half of independents (45%) approve, compared to less than two in 10 Republicans (15%). Partisans’ views of the governor have stayed within a narrow range over two years—reflecting the hyperpartisanship, or lack of movement in opinions, that we also observed in the approval ratings of Democratic Governor Jerry Brown and Republican President Donald Trump. 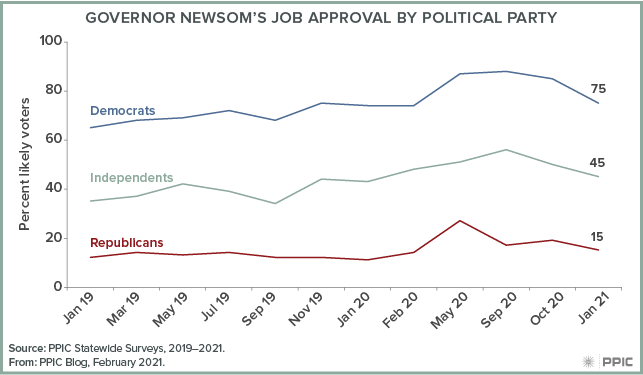 It’s important to keep in mind that California’s Democratic voters vastly outnumber Republican voters (46% to 24%) and that likely independent voters lean toward the Democratic Party, according to PPIC surveys. Democratic candidates have won every statewide election since 2008—often by wide margins. This includes Newsom’s victory in 2018 (62%) and Biden’s win in 2020 (64%). Combined, numerical advantages and hyperpartisan opinions are powerful political deterrents to removing a Democratic governor in 2021.

But hyperpartisanship also works to the advantage of recall proponents when it comes to gathering the approximately 1.5 million voters’ signatures needed to qualify for a 2021 special election. Eight in 10 of Republican likely voters say they disapprove of Governor Newsom, and there are 5.3 million in California. Nine in ten of the likely voters who said they were voting for Trump also said they disapproved of Governor Newsom in our October PPIC Survey; there were 6 million votes for Trump in November.

In short, the math favors the effort to qualify for the ballot. But the base of Republicans (24%) or Trump voters (34%) falls well short of the majority needed to remove and replace the governor.

Assuming there will be a governor’s recall election in 2021, the political wildcard is the status of COVID-19 in California. In the January PPIC Survey, about half of likely voters say that COVID-19 is the most important issue for the governor and legislature to work on in 2021. Currently, Governor Newsom has mixed reviews for his handling of this issue (50% approve, 47% disapprove). And less than three in ten give the state government an excellent or good rating for its handling of the COVID-19 vaccine distribution. In contrast, seven in ten approve of the way that the pandemic is being handled by Joe Biden in his early days of presidential leadership.

If Californians are satisfied with the COVID-19 response, a recall election may not gain much traction. But if Californians are frustrated, it could set the stage for a recall election that upends the political status quo. PPIC will be monitoring changes in public opinion about the governor, COVID-19, the economy, and re-opening schools—while keeping a watchful eye on the prospects of a special election in 2021.