Jelena Jezdimirovic May 22, 2018
NEVER MISS AN UPDATE!
Sign up for our blog alerts to receive insights from PPIC by email.

The San Joaquin Valley is ground zero for groundwater management challenges. While agriculture is the region’s predominant water user, its cities are more likely to rely on groundwater as their primary source of water. For this reason, the urban sector will need to play a bigger role in the regional effort to balance groundwater use and replenishment.

Our recent research indicates that cities in the valley lag behind agricultural districts in the intentional recharge of groundwater. That’s primarily because most have limited access to two things necessary for storing more water underground: extra surface water and unpaved land on which to spread it so it can percolate into the ground. But some cities have had success with recharge activities. Here are three methods that can serve as models.

Some cities engage in multiple recharging strategies. For example, both Tulare and Fresno operate flood control basins to maximize recharge, and Tracy pumps surplus water directly into a nearby aquifer through an “injection well.”

While these are all innovative models, most are still small-scale in terms of volumes recharged. Given the state’s mandate to balance groundwater use with replenishment by 2040, urban efforts will need to be scaled up as much as possible. Expansion will require better water accounting and basin planning. Cities can raise funds to partner with agricultural districts and undertake recharge projects, but they will need incentives and assurances that they will have access to the stored water.

Another critical step is to map and protect undeveloped urban land that is particularly appropriate for recharge. Cities should take steps to prevent the paving over of suitable soils, and encourage recharge on open space lands not only within city boundaries but also in areas into which they are likely to grow in the future—called their “spheres of influence.” As the figure below shows, suitable soils in these areas are extensive, especially in Kern and the eastern part of the valley.

It’s also important to remember that cities won’t be able to go it alone. In addition to partnerships with agricultural districts, broader local and regional cooperation will be critical for managing groundwater resources in the long run. 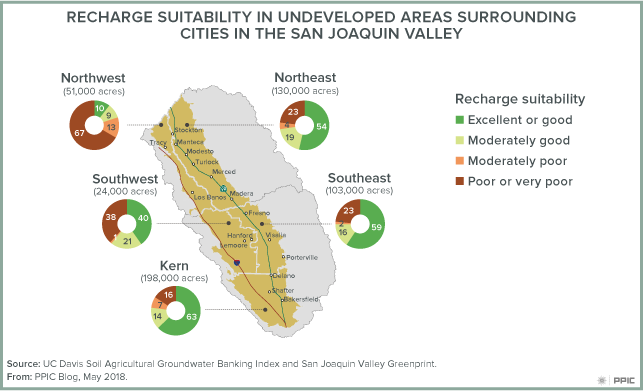