For Many Californians, Poverty Is One Minor Expense Away

Add one extra expense and families living just above the poverty line could fall into poverty. Data from the California Poverty Measure (CPM) show that 7.2 million Californians live near poverty, that is, with just enough resources to meet their basic needs. All told, in 2017 as many Californians lived just above the poverty line as below it, or about 18% in each case. Even a small change, a monthly expense of $250 or less, could push 1.6 million people under the line.

We define “near poverty” to mean having resources worth 1 to 1.5 times the poverty threshold after taxes and necessary expenses. Since the CPM accounts for California’s varied living costs, the range for near poverty differs across regions. In Fresno County, a family of four who rents their home and has $25,900 to $38,900 in resources is near poverty, while in Santa Clara County, the same is true of a family of four with $40,000 to $60,000. 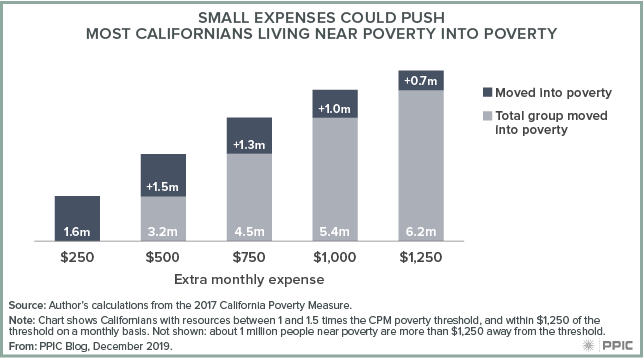 Near poverty affects young people more than it does older Californians, and children under 18 are more likely to be near poverty (23.6%) than in poverty (19.3%). Young adults and seniors, however, are more likely to be in poverty. Regional differences in living costs, opportunity levels, and the impact of existing policies and programs are key factors driving this variation. 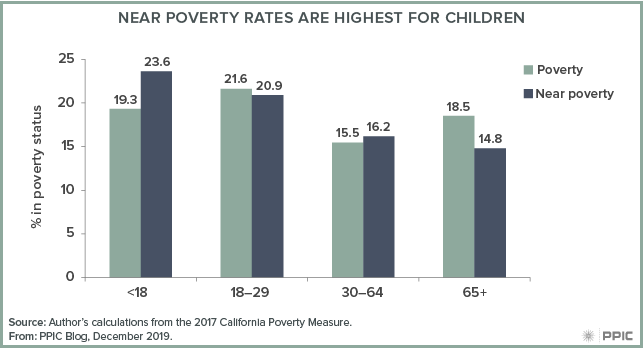 Without safety net programs, more people, and in particular, more families with children, would face poverty instead of near poverty: resources from programs including CalFresh and the federal and state Earned Income Tax Credits (EITCs) keep 7.1% of Californians out of poverty. Yet almost all people (93%) who move out of poverty via the safety net move into near poverty. This fact has implications for policymakers’ ongoing efforts to help ensure all Californians can meet their basic needs. As the state works to reduce poverty, strategies that promote economic mobility complement investments in programs like the CalEITC and the new Young Child Tax Credit.