Half of Asian Americans Say Race Relations Have Worsened

Issues of systemic racism and racial justice have been front and center in the US. In the past year, the COVID-19 pandemic has exposed and widened racial inequities in health care, education, and employment. The killing of George Floyd and other African Americans in police custody and an upsurge of anti-Asian sentiment and violence—including the recent shooting in Atlanta—have further underscored the urgency of these conversations.

When asked about the current state of race relations in the US in PPIC’s March survey, a plurality of Californians (43%) said that things are worse than they were a year ago, compared to 36% who said things are about the same and 19% who felt things are better. Notably, the share saying race relations have gotten better has risen 13 percentage points among all adults since we last asked this question in September 2020. The responses in March were similar to when we asked this question in January 2019, about a year before the pandemic.

But these overall findings mask differing views across racial/ethnic groups. In March, Asian Americans were the most likely to say that race relations in the US are worse than they were a year ago. Half of Asian Americans said this, compared to 48% of whites, 44% of African Americans, and 32% of Latinos. 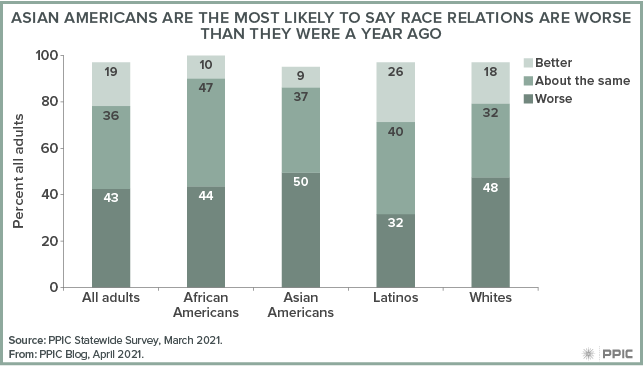 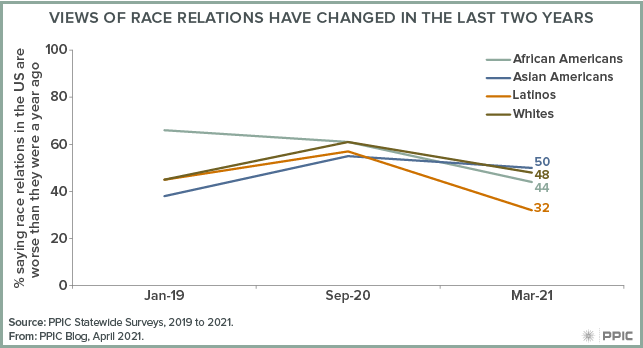 As California and the country emerge from the pandemic and grapple with the racial injustices that have been laid bare in the past year, views on race relations will continue to be a critical topic. Stay tuned to the PPIC Statewide Survey as we track Californians’ perceptions on race, equity, and other key issues.