More than one million California renters are behind on their rent payments, and about a half million of them believe that it is likely they will face eviction in the next two months, according to recent Census Bureau surveys. The Supreme Court struck down the federal government’s eviction ban last month. With California’s eviction moratorium ending today, the potential for widespread hardship is enormous.

The pandemic has revealed broad inequities with respect to housing security. Overall, about one in seven adult renters in California reports being behind in rent payments, a share that has not changed much over the course of the pandemic. 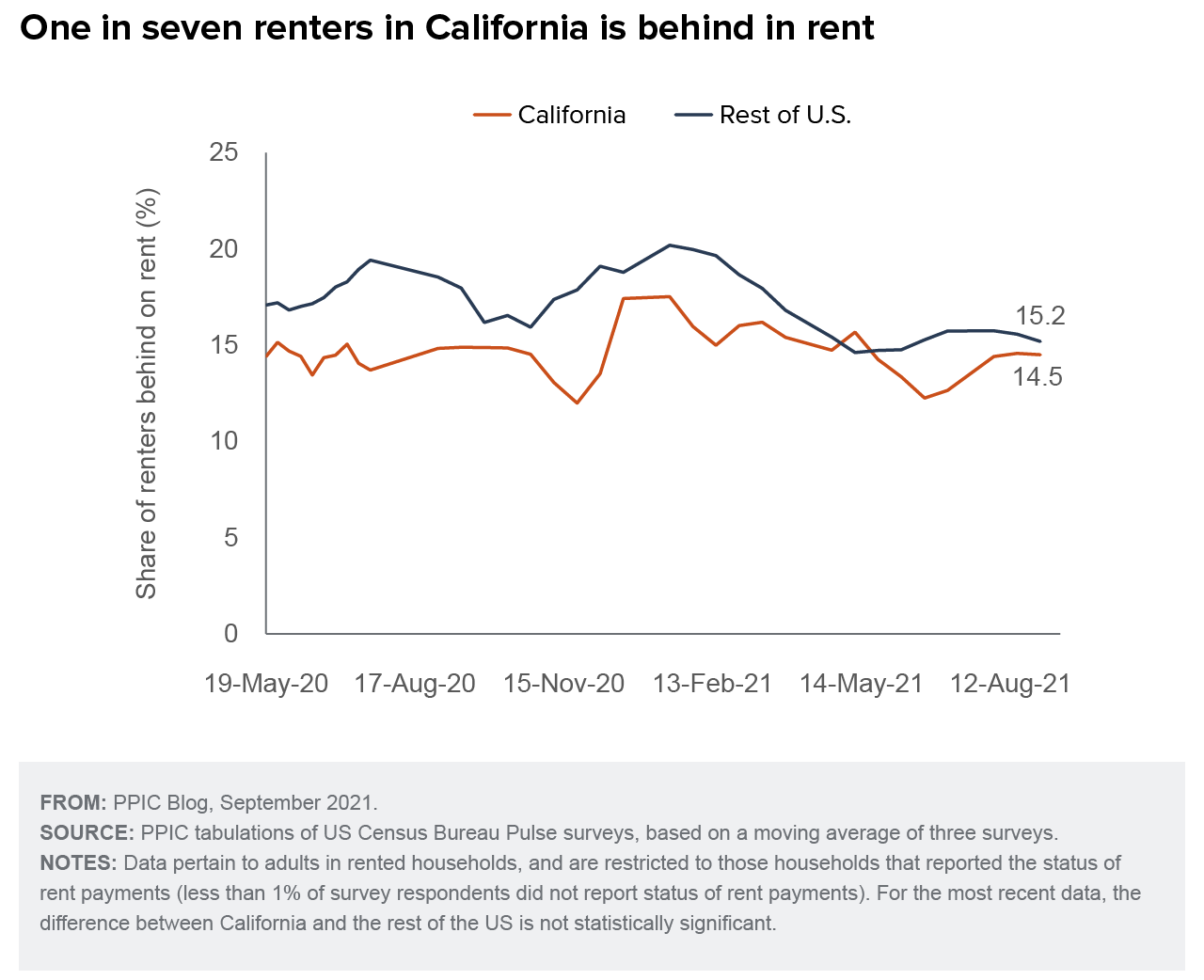 College graduates have not faced the economic and employment hardships of less educated workers – they are often able to work remotely and have relatively high wages. These renters have very low rates (8%) of being behind in rent.

Before the pandemic, California renters already faced one of the most expensive rental markets in the nation.  In 2019, 26% of California’s renters paid more than half their income on housing, compared to only 22% in the rest of the nation. 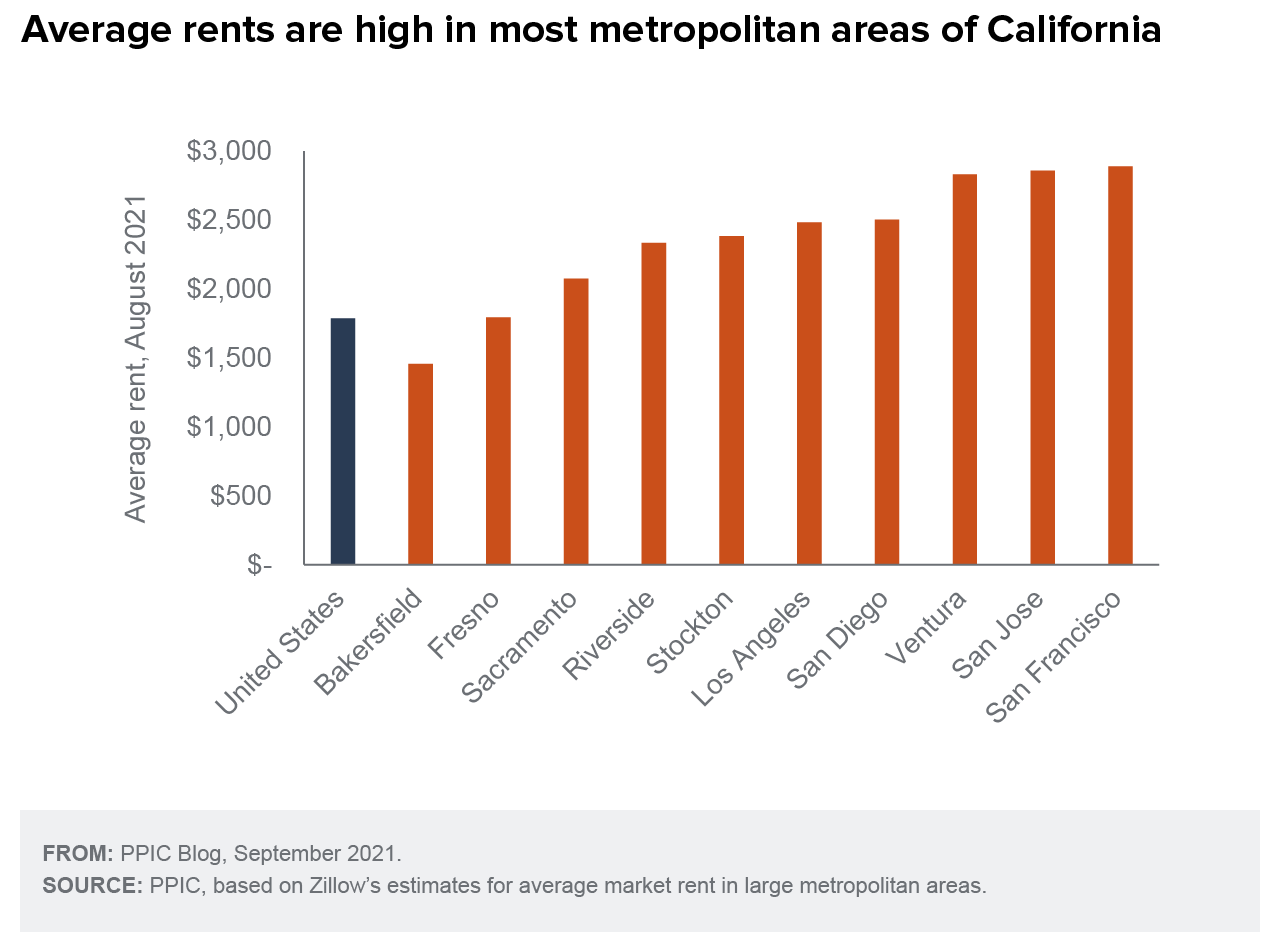 During the pandemic, rents have fallen a bit in the Bay Area, but have risen substantially in much of the rest of the state. Inland markets that used to be affordable have become much less so. Now, only Bakersfield has average rents lower than those in the rest of the country. 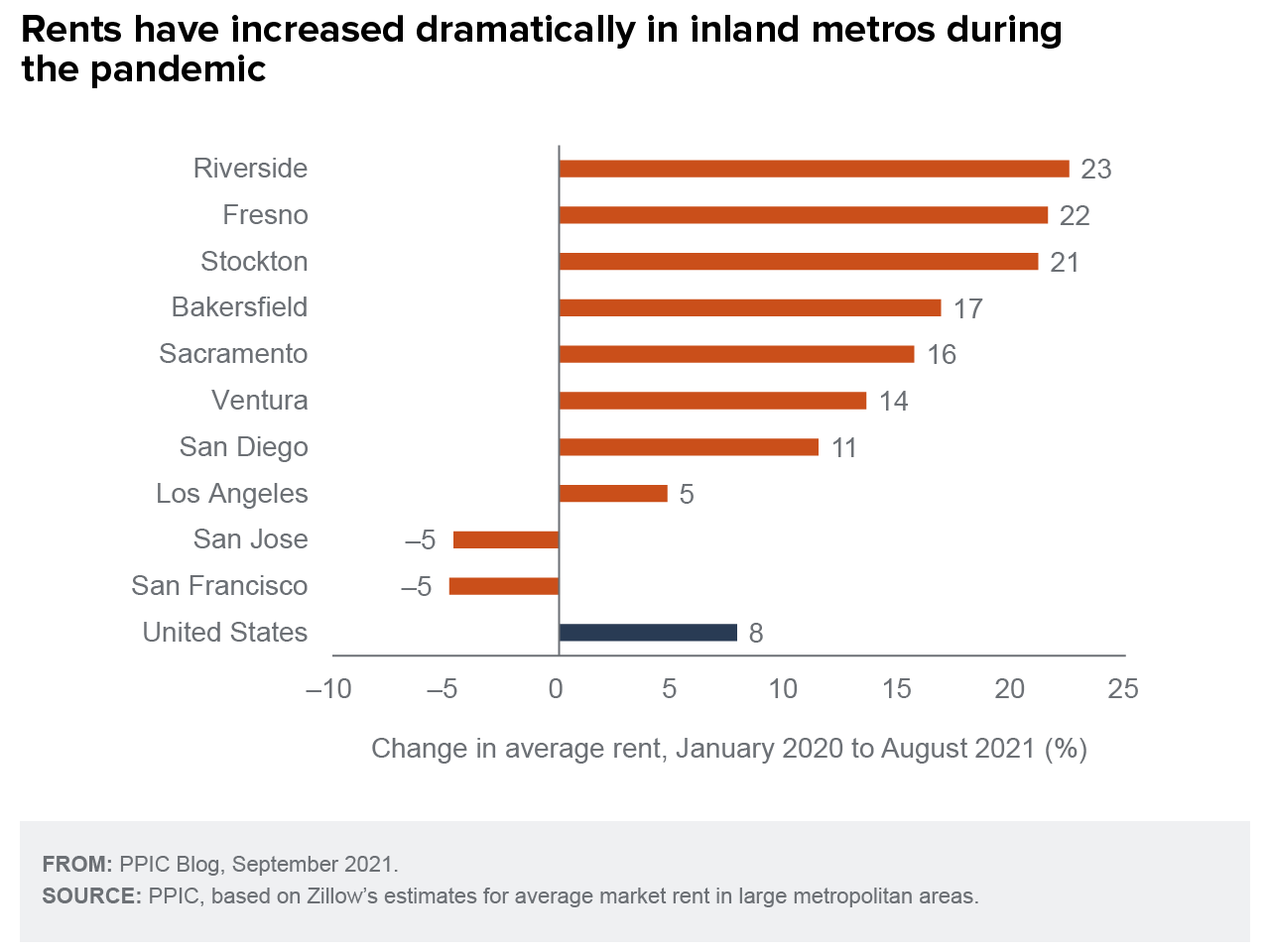 Policies and programs to alleviate the plight of overwhelmed renters—and provide landlords with payment for their units—have struggled to deliver the needed help. The National Equity Atlas reports that California has distributed just 22% of the $2.6 billion allocated to the state for emergency rental assistance by the federal government. (Only eight states have distributed a higher share of their allocation, according to the same source.)

As of September 27, the California Department of Housing and Community Development reports receiving over 200,000 eligible applications requesting $3 billion in assistance. So far, the department has provided $649 million to assist 55,000 rental households with utility and rent payments. These numbers do not include programs administered by some of the state’s largest cities, including Los Angeles, Sacramento, and San Diego. Renters who have applied for assistance are protected from eviction through March 2022.

Even with recent increases in applications, the majority (58%) of Californians behind in rent have not applied for assistance, according to Census surveys through early September. Among those who did, most were still waiting to hear if their application would be approved. Among applicants who were approved, concern about eviction was far lower (22% thought it was somewhat or very likely they would be evicted in the next two months) than among those who were denied (87% thought they would be evicted). The state reports that very few applicants were denied.

Housing is an essential component of California’s recovery. As the state’s eviction moratorium comes to a close, California’s renters and landlords face a difficult new phase in an economy still contending with the pandemic’s far-reaching impact.