California has had a devastating series of natural disasters recent years, prompting questions about the role of climate change in worsening fires, droughts, and floods. We talked to Amir AghaKouchak—an associate professor of civil and environmental engineering at UC Irvine―about how a warming climate is affecting natural hazards. 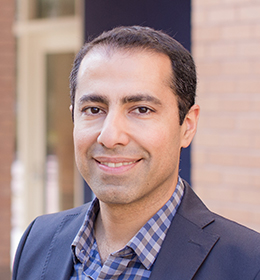 PPIC: Can you talk about how climate change is causing chains of extreme events?

Cascading events are a special form of compound events. Sometimes the drivers involved in a cascading event are physically independent (e.g., a wildfire in summer and a rainfall event that winter), but they are linked through their impacts. The Thomas fire in Southern California didn’t cause the related mudslide. But the order of these events—they were about a month apart—had an extreme impact. Models show that a warming climate will bring more wildfires to California, which means a higher chance of future mudslides and debris flows.

We know, for example, that drought and heat waves are connected. It’s widely acknowledged that California’s climate is warming. But what’s striking is that our droughts appear to be warming much faster than the overall average. Heat waves often have atmospheric origins, but they can also be worsened by dry conditions. The way soil cools down is similar to what our bodies do—we sweat and are cooled by its evaporation. The land’s surface cools the same way. But when there’s little or no moisture for evaporation, the sun’s radiation warms the surface and intensifies heat waves. A hotter future will bring drier soil, which can lead to more intense heat waves.

PPIC: What can be done to better manage future extreme events?

AA: Historically, we have usually ignored the relationships among the variables used to assess risk. For example, US Geological Survey guidelines for flood risks in coastal areas do not consider the dynamics of the oceans. Sea level rise brings a greater chance of flooding in coastal areas due to higher tide and surge baselines. We need to develop methods that allow us to do more comprehensive risk analysis for floods, wildfires, mudslides, etc. On the science side, we need better methods to analyze the risks of related events. More public education and outreach about these types of events are also very important. Moderate rainfall may not worry you, but if it’s after a wildfire it could lead to extreme risks. We need to make sure people understand that moderate events can potentially lead to an extreme disaster cascade.

PPIC: What are some changes we should start making now to boost resilience for these “disaster cascades”?

AA: Policy change isn’t easy. But California is very progressive and has even formed a committee, which I’m a member of, to assess how climate change information can be used for improving engineering design and management of infrastructure. Our report identifies gaps and challenges, and offers nine major recommendations for making the state’s infrastructure “climate safe.” For example, we call for updating design and maintenance codes to enhance resilience. We also recommend funding collaborative efforts between state infrastructure agencies and climate scientists to develop tools for improving resilience.

Addressing these gaps won’t be easy. The good news is that the working group has had representation from all the major state agencies―including the Department of Water Resources, Caltrans, and the California Energy Commission. The agencies are interested in working together to improve resilience down the road. This is a very promising sign for the future.

Adapting to an Uncertain Water Future