How Different Would California’s Elections Be If 17-Year-Olds Could Vote?

The legislature has placed a constitutional amendment on the ballot this fall, Proposition 18, that would let any 17-year-old citizen vote in a primary or special election as long as that person turns 18 by the following general election. How many people could this change affect, how would they be different from existing voters, and how might that change elections in California?

We can get a sense of the law’s impact by looking at the state’s voter registration data base and identifying those who would have been affected by this law in the past two election cycles. Let’s call them “Prop 18 voters.” They amounted to more than 200,000 people in 2016 and 2018. They also comprised a substantial share of all new registrants who became old enough to vote for the first time at some point in each election cycle: 19% in the 2016 cycle and 22% in the 2018 cycle. 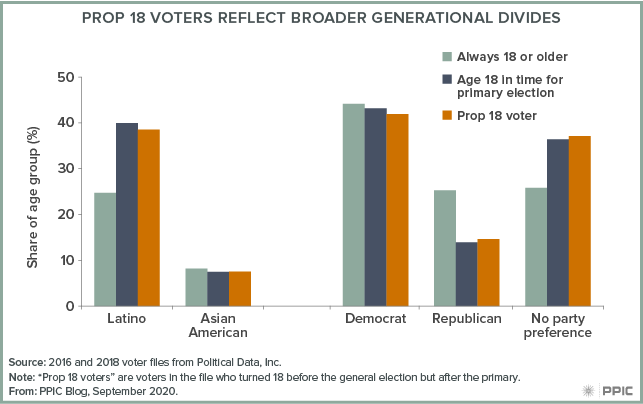 Not every Prop 18 voter will necessarily take advantage of the new opportunity. In the past, those who have turned 18 in an election cycle before the primary—and so who were eligible to vote under existing rules—often did not participate until the primary was over. Only about half registered in time for the primary (57% in 2016, 50% in 2018), and fewer than half of those who registered actually voted in the primary itself (42% in 2016, 24% in 2018).

Nonetheless, primary electorates are currently unrepresentative of the much larger electorate that votes in the fall. Moreover, primary outcomes can turn on just a handful of votes. In the 2016 and 2018 primaries, a total of 33 state legislative or congressional races had enough Prop 18 babies to potentially move a different pair of candidates to the fall election. Primary elections also often feature myriad local races.

Special elections can be impacted, too. For example, Assembly District 39 held a special primary election in April 2018 that was decided by 60 votes—at a time when over 2000 Prop 18 voters in the same district were not eligible to participate.

Prop 18 voters are a large group in raw numbers, but small as a share of the total electorate. If Prop 18 passes, it is likely that the primary and fall electorates would still differ. At the same time, the voters enabled by Prop 18 would be very different on average from the ones already registered.

In the end, the overall consequence of Prop 18 on California’s elections would likely be small, but the outcome for a few specific races might turn on the change.

California’s Missing Voters: Who Is Not Voting and Why