How Prevalent Is Policing in California Schools? 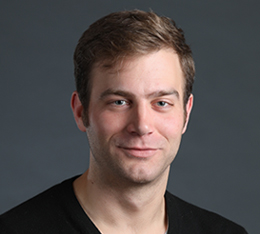 As communities across California and the nation evaluate their policing institutions, many school districts are examining their use of “school resource officers” (SROs)—sworn police officers, typically armed, with the legal authority to make arrests. Districts in Minneapolis and Portland recently ended their SRO agreements with local police departments. Several California districts—including Oakland, West Contra Costa, and Pajaro Valley Unified—have followed suit, while Los Angeles Unified and others have opted to reduce budget allotments. How prevalent have SROs been in California?

Most California schools with SROs contract with local police departments, but some districts have departments dedicated entirely to school policing (such as the Los Angeles Schools Police Department). High schools are more likely to have SROs (37%) than middle schools (16%) or elementary schools (10%), according to US Department of Education Civil Rights Data Collection.

Because SROs are more prevalent among schools with higher enrollment, however, the percentage of students across the state who attend schools with SROs is much higher: two-thirds of high school students, a quarter of middle-schoolers, and about 11% of elementary-grade students. 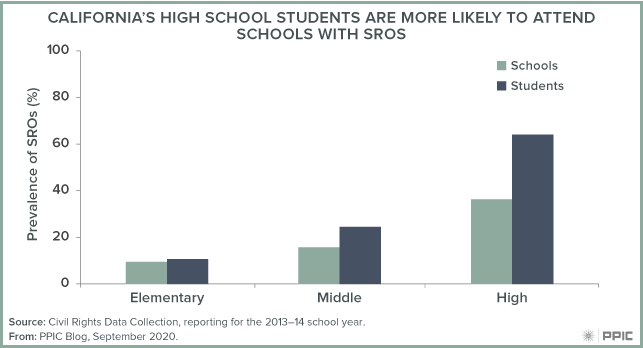 The probability of attending school with an SRO is even higher for older students who are African American or Latino. Although elementary-grade students in all racial/ethnic groups are about equally likely to attend school with an SRO, there are disparities among middle schoolers and the gap is largest in grade 9:  Latino and African American ninth-graders are roughly 14% and 16% more likely to attend an SRO school than whites, respectively. 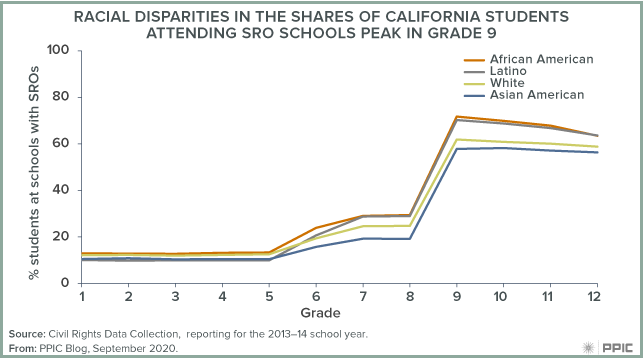 Research has yet to determine whether SROs make schools safer. However, surveys of middle and high school students indicate that student perceptions of security differ by race and gender. In particular, African American students, females, and students who have experienced school violence report feeling less safe in schools with an SRO, while males and students with strong connections to their schools feel more safe.

These differing perceptions of safety translate to disparities in educational experience across demographic lines. But the renewed focus on racial disparities spurred by the COVID-19 pandemic and Black Lives Matter protests could help school officials find security solutions that work for all students.