Rachel Lawler, Deja Thomas April 16, 2021
NEVER MISS AN UPDATE!
Sign up for our blog alerts to receive insights from PPIC by email.

The police shooting and death of Daunte Wright, and the ongoing trial of Derek Chauvin for the murder of George Floyd, have pushed issues of racial injustice in policing back into the headlines. As protests against police brutality continue across the country, do Californians think police in their community treat all racial and ethnic groups fairly?

In the March PPIC Statewide Survey, we found that a majority (54%) of California adults say police treat all racial and ethnic minorities fairly “almost always” (25%) or “most of the time” (29%). The survey was fielded from March 14–23, prior to the start of trial of Derek Chauvin and the shooting of Daunte Wright. In September 2020, after a summer of nationwide protests against the death of George Floyd, similar shares responded that all groups received fair treatment either almost always (24%) or most of the time (30%). However, the shares holding this view have declined from both February 2020 and May 2019 (30% almost always, 31% most of the time in both surveys). 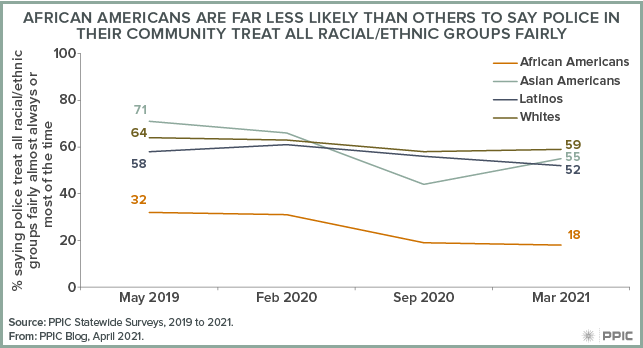 Wide differences once again emerge across racial/ethnic groups. African Americans (83%) and Asian Americans (74%) are much more likely than whites (56%) and Latinos (50%) to say people not seeing racial discrimination is the bigger problem. 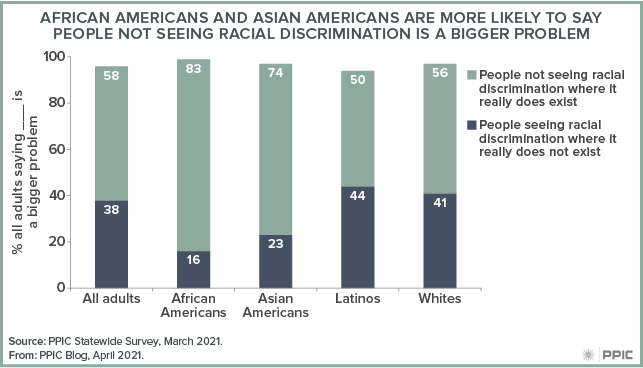 PPIC will continue to track the views of Californians on these important topics to help drive critical conversations about police brutality and enduring racial inequities.