Striking disparities in our criminal justice system have come to the fore in the wake of George Floyd’s murder in police custody. Racial/ethnic disparities in criminal justice outcomes in California—from arrests through incarceration and correctional supervision—have been well documented. But so far, little has been known about such disparities in the numerous interactions between police officers and community members that do not lead to a citation or arrest.

One way to examine these interactions is through “stop data.”  This type of data records any law enforcement interactions in which a person is detained or searched by an officer. In 2015, California passed the nation’s most comprehensive stop data law. Known as the Racial and Identity Profiling Act (RIPA), this law requires that by January 1, 2022 all law enforcement agencies begin collecting information on race and other characteristics of those stopped by law enforcement (as perceived by the officer making the stop).

Last year, the state’s eight largest agencies published the first wave of this data, which includes more than 1.8 million stops taking place between July 1 and December 31, 2018. The agencies include the California Highway Patrol, the police departments of the cities of Los Angeles, San Diego, and San Francisco, and the sheriff departments of Los Angeles, San Bernardino, Riverside, and San Diego Counties. 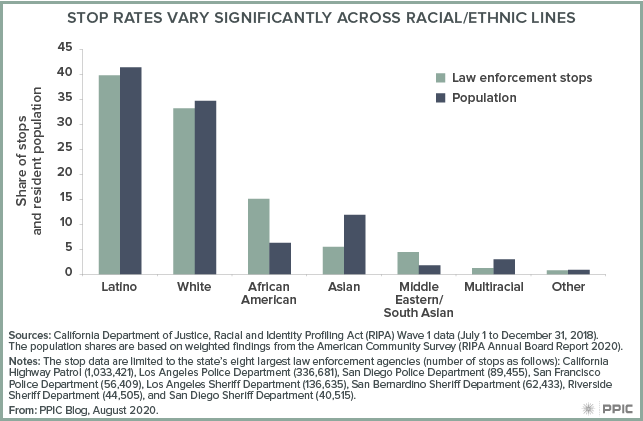 Focusing on African Americans, for whom racial inequities are most striking, we find disparities in all eight of the agencies. We also find that disparities were most pronounced in stops conducted by city police departments, as opposed to California Highway Patrol or county sheriffs. In San Francisco, African Americans make up a little over 5% of the city’s resident population, but they accounted for more than 25% of stops by SFPD. The data for Los Angeles and San Diego showed a similar trend: while African Americans represent 9% and 6.5% of residents in these cities, respectively, they made up nearly 28% of stops by LAPD and 19% of stops by SDPD. 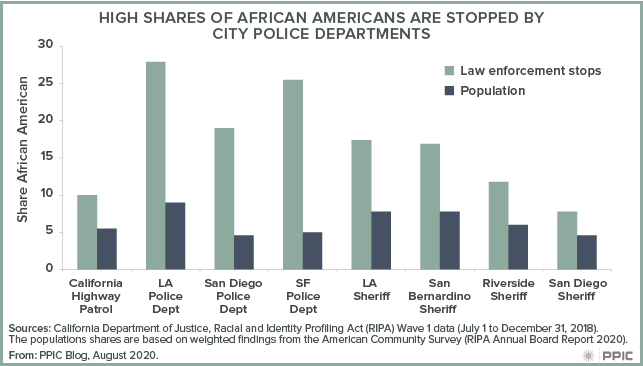 To what extent these descriptive statistics represent racial profiling and biases is not clear, as many factors influence the composition of stops. However, the data clearly shows that African Americans make up a much larger share of interactions with law enforcement relative to their populations share than any other racial/ethnic group in California.

Understanding the factors that contribute to this disparity—as well as the reasons for a stop, actions taken by an officer, and the use of force—is fundamental for having productive discussions and taking effective action aimed at reducing racial inequity. We plan to further examine California’s RIPA data and report on our research into these issues in the months ahead.