How Will the Coronavirus Affect California’s Economy?

As Californians limit their daily activities to slow the spread of the coronavirus, the state economy is poised to take a major hit. The pandemic is increasing the need for some goods and services (such as health care) and reducing demand for others (such as travel- and entertainment-related services), so the near-term economic consequences are more serious in some sectors than in others. Moreover, these consequences could exacerbate the unevenness of economic conditions and opportunities across regions.

Initially, the largest downturns are likely to occur in sectors that rely on the movement of people and nonessential goods. Recent forecasts have identified several “at risk” sectors: accommodations and food service; arts, entertainment, and recreation; administrative and support services, especially employment services; mining and oil/gas extraction; transportation and warehousing; and agriculture (UCLA Anderson and Moody’s Analytics). Shocks in these industries will be driven by reduced local demand, as well as slowing of trade in and out of California’s ports (especially relevant for the transportation and warehousing and agriculture sectors).

These sectors—excluding agriculture—comprise 10% of the state GDP and employ 3.9 million workers. Unemployment insurance claims data is starting to show the impact on workers, but it will be a while before we get detailed data for all California workers (including those who do not apply for unemployment insurance).

We can, however, learn a lot about the pandemic’s impact on workers, sectors, and regions from recent employment statistics. Employment in these sectors makes up more than a fifth of overall non-farm employment in both California (22%) and the nation as a whole (21%). 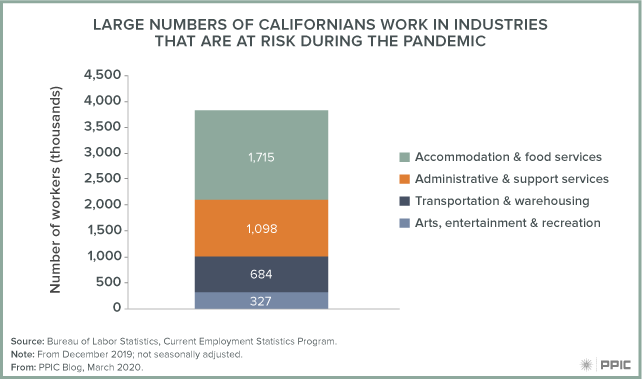 The workforce in these industries is not just large; it also comprises a wide range of occupations (for example, pilots as well as baggage handlers in the transportation industry; hotel managers as well as cleaning staff in the accommodation industry). At this point, we cannot predict exactly how the COVID-19 crisis will affect these workers. But reduced hours and layoffs are highly likely, and the workers least able to weather the storm are those who already struggle with poverty.

Overall, we estimate that 19% of Californians employed in these industries are working poor and another 22% are just above the poverty line (“near poor”). The poverty rate among workers in the accommodation and food service sector is 24%. This sector, which is being hit hard by reduced tourism and dining out, is the largest of those expected to experience the most immediate economic consequences. 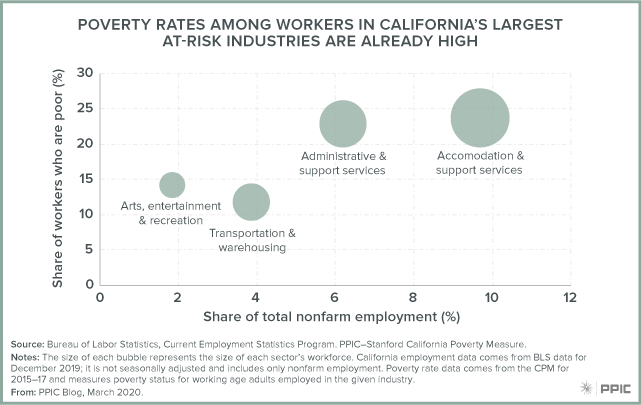 Because California’s industries are not evenly distributed, the initial impact on economic activity and on workers will likely vary across the state. Among major metro areas, Los Angeles, Anaheim–Santa Ana–Irvine, Stockton, and Riverside–San Bernardino have larger shares of jobs (ranging from 22% to 28%) in at-risk sectors than the state as a whole.

As one might imagine, these areas differ from one another in many ways. While Stockton has a relatively large share of employment in transportation and warehousing, Anaheim–Santa Ana–Irvine has a large share in accommodation and food services. Not surprisingly, given its population, the Los Angeles metro area has by far the largest number of workers in at-risk sectors: 1,043,000. Riverside and Anaheim follow with 433,000 and 417,000, respectively. 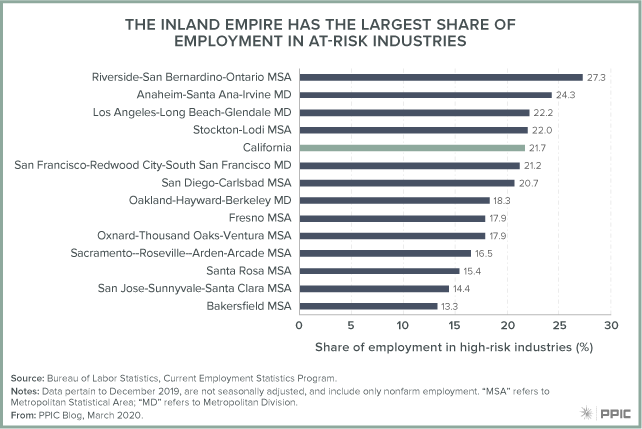 The longer-term economic impact of the coronavirus on these and other sectors will depend on how long the crisis lasts. Policy responses can play a critical role in mitigating the economic damage. State and federal leaders face the challenge of helping businesses weather the crisis and rebound quickly, while also addressing the tangible needs of workers who may be losing income, especially those who are already in or near poverty.

A host of economic interventions—many of which aim to help dislocated workers—have already been announced, and more will be implemented as the economic consequences of this pandemic become clearer. As they develop these interventions, policymakers will want to take into account industries and workers across all of California’s regions.

Looking Ahead to California’s 2021 Labor Market