After challenges from California and schools around the nation, the Trump administration has backed away from a policy that would have blocked international students from entering or staying in the US if they were enrolled solely in online college courses. This shift puts to rest urgent questions about the education, health, and safety of these students—more than 148,000 of whom attend colleges and universities in California.

International students make up an essential part of higher education in the state. These students offer a critical and diverse set of skills and perspectives; they also contribute significantly to the fiscal health of both public and private institutions.

In California’s private nonprofit institutions, for example, international students make up about 11% of total enrollment, which makes them responsible for a considerable portion of tuition revenue. 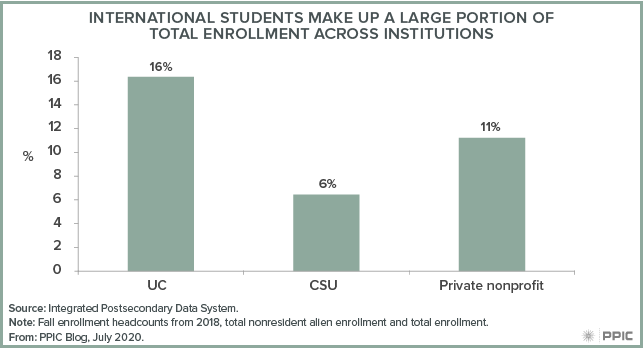 California’s public institutions may even be more dependent on international students, who make up 16% of total enrollment at the University of California and 6% at California State University. These students pay far more tuition than Californians do. At UC, nonresidents (which includes international students and nonresident domestic students from other states) pay the same base tuition ($12,570) as residents do, and they also pay an additional $29,754 in supplemental tuition. According to UC, this supplement helps to support California residents attending schools in the UC system. At CSU nonresidents pay a $5,742 base tuition and a supplemental tuition of about $11,800.

Since the Great Recession, the number of international students at UC more than tripled, while CSU’s number increased 59%. These increases were part of efforts to make up for revenue lost from the state budget, linking the systems’ financial health to students from other countries.

As the school year begins, higher education institutions will have to balance numerous factors, from the health and safety of their students, staff, and local communities, to their core educational mission, to their fiscal health. International students will have an important role to play in that balancing act.