Governor Newsom and the legislature reached a budget deal in June that avoids immediate cuts to K–12 education and the community college system. However, the University of California (UC) and the California State University (CSU) face significant revenue loss this year and may see further cuts in the coming years.

The budget reduces funding by $470 million for UC and $500 million for CSU from the governor’s pre-pandemic January budget proposal. UC funding will be about $258 million lower than the previous budget year, and CSU faces a reduction of about $300 million. These cuts could be rescinded in October if at least $14 billion in additional federal stimulus funding is provided. If the state receives less than $14 billion but more than $2 billion, funding would be restored proportionately.

California’s public four-year universities have experienced severe funding cuts during previous economic downturns. Funding for UC and CSU was cut by more than a third during the Great Recession. To make up for this lost revenue, the systems increased tuition 100% over three years and increased out-of-state enrollment.

Given COVID-19 travel restrictions, the health concerns of students and their families, and a cap on non-resident enrollment at UC, the systems are unlikely to generate the same level of replacement funding during this downturn. Indeed, the cost of online learning resources and training coupled with a significant drop in revenues from auxiliary enterprises such as housing, parking, and food services could increase budget woes.

Moreover, recent policy changes regarding visas for international students could lead to the loss of millions in additional revenue. These students comprise about 16% of enrollment at UC and pay about three times more in tuition than in-state students. (UC has filed a lawsuit against the Trump administration over the new policy.)

In the past, federal aid has helped mitigate the impact of state funding cuts. During the Great Recession, the American Recovery and Reinvestment Act (ARRA) was critical in preventing enrollment cuts and additional tuition increases.

In the early days of the pandemic, the CARES Act provided $1.7 billion to fund higher education in California; $785 million was allocated to UC and CSU, with the vast majority distributed directly to campuses. This funding helped colleges shift to online instruction, refund student room and board fees, and avoid mass layoffs and furloughs. 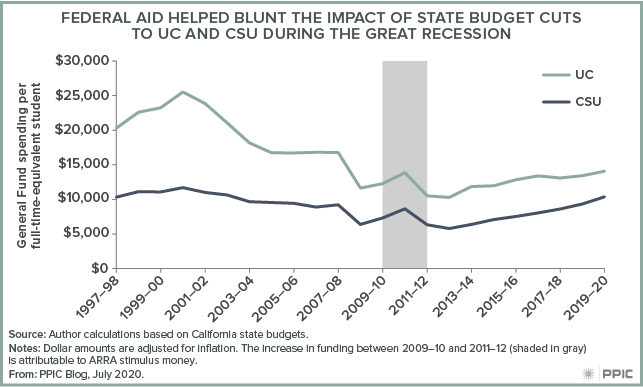 The budget deal optimistically projects an additional federal stimulus in the coming months. The HEROES Act passed by the US House in mid-May would provide $27 billion for public higher education. However, the HEROES Act was not taken up in the Senate before Congress began its July recess. While additional federal funding may not materialize by October, the state does have $11.3 billion in its budget reserve.

The COVID-19 crisis has created unprecedented challenges for UC and CSU, and it is unlikely that either system will be able to make up for lost revenue as they have in the past. But the crisis has also been a catalyst for innovation in remote learning. After developing slowly over the past two decades, online instruction quickly became a major priority for UC and CSU in the early days of the pandemic. Further innovation could help UC and CSU significantly expand access and improve student success in the longer term. PPIC will be monitoring their progress and sharing what we learn.