Recent news of wealthy parents allegedly paying bribes to get their children into elite colleges has raised a lot of questions about the college admissions process. While fewer than 100 students were involved—out of more than 1 million new college freshmen every year—the scandal brings up larger issues of equitable college access and high income inequality in California.

More than half of Californians (53%) say qualified students from low-income families have less opportunity than other students to get a college education, according to a 2018 PPIC survey. Even without resorting to bribery, there are many advantages that students from high-income families have in college admissions, including living in safer neighborhoods, attending better high schools, and having more help preparing for the application process (e.g., paying for SAT or ACT prep courses). Admission practices at most private colleges also favor students who can pay the full price of attending. 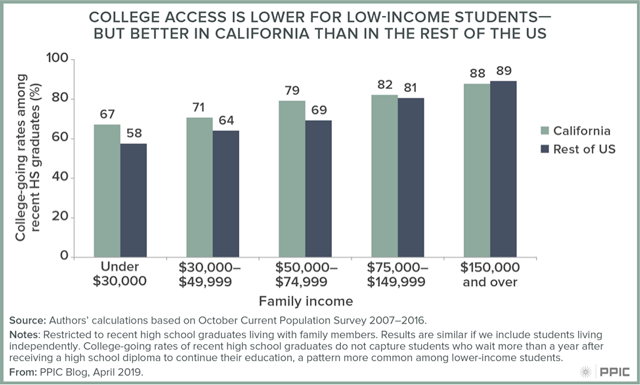 California’s large public higher education system is key to ensuring broad access. The University of California (UC) enrolls more low-income students than any other public research university system in the country. Indeed, applicants from disadvantaged backgrounds are given extra consideration in UC’s “holistic review” process. Thirty-eight percent of UC undergraduates in 2016–17 received Pell grants (federal grants to low-income students), compared to 26% of undergraduates at public research universities in the rest of the country. 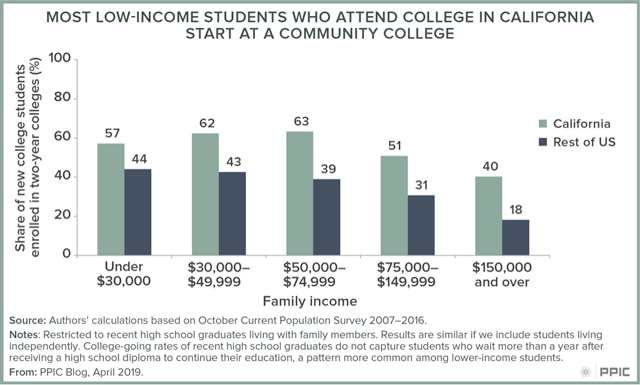 Although college access for low-income students in California is relatively good compared to the rest of the nation, more can be done. For example, improving financial aid would make college more accessible to more low-income students and would likely lead to higher graduation rates. And because so many low-income students start at community colleges, increasing transfer rates is critical to ensuring that higher education continues to serve as a ladder of economic mobility. New reforms at the community colleges—including changes in remediation and the Associate Degree for Transfer program—should lead to substantial increases in transfer and help more students achieve their academic and economic goals.

Higher Education as a Driver of Economic Mobility