Many of California’s Highly Educated Workers Are Retiring

As California’s population ages, record numbers of people are now going into retirement. Because so many of these recent retirees are highly educated, this trend has important implications for workforce needs in the state. Replacing these highly educated retirees will require large increases in college enrollment and completion among young Californians.

The number of retirees in California has grown dramatically over the past 10 years. Their total numbers grew from 3.8 million in 2008 to 5.2 million in 2018, a 38% increase—far higher than the state’s overall population growth of 8% during this same period. This rapid growth in retirees is a consequence of the aging baby boom, the very large cohort of people born between 1946 and 1964. During that post-war era, new social norms meant that the typical family had three or four children. The leading edge of the baby boom reached age 65 in 2011. Because the tail end of the baby boom is larger than the leading edge (in California, the birth rate peaked in 1957 and the number of births peaked in 1961), the number of retirees will continue to grow strongly for the next decade. The tail end of the baby boom will reach age 65 in 2029. 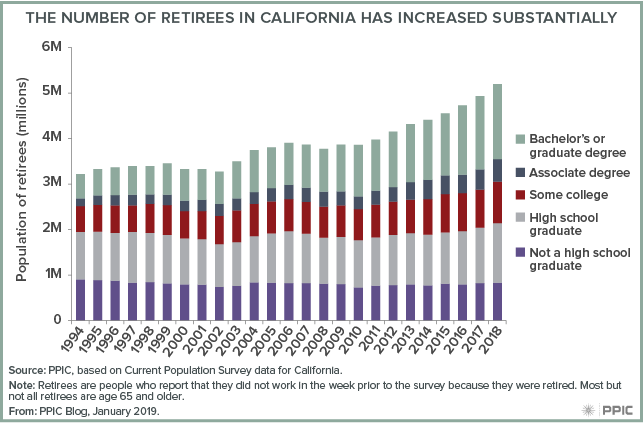 Children born during the baby boom ended up far better educated than their parents. Policies such as the GI Bill, along with public investments in California’s public higher education system, allowed for relatively inexpensive, widespread access to college. Today, the number of retirees with a bachelor’s or graduate degree is larger than ever. Between 2008 and 2018, this group increased by more than 700,000 and made up a majority of the net increase in the retiree population. 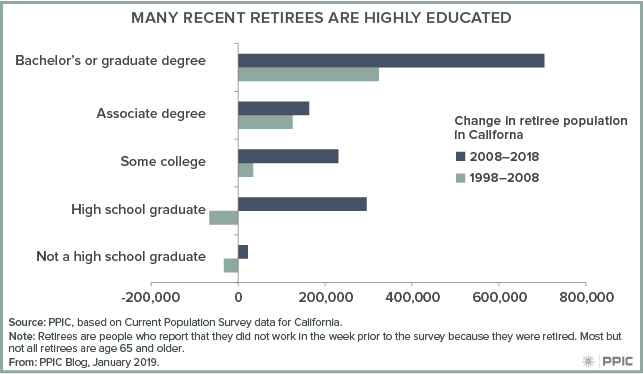 The retirement of so many highly educated workers is unprecedented and poses a tremendous challenge for California. Every year, the number of new retirees with a bachelor’s degree (more than 70,000 per year in the last decade) exceeds the number of bachelor’s degrees awarded by the entire University of California system (55,000 in academic year 2017–18). Without producing more college graduates, California could see a shortfall of 1.1 million highly educated workers by 2030.

The good news is that the state and its higher education institutions are making progress by increasing enrollment, graduation rates, and degrees awarded. These advances have been made possible at least partly because of renewed funding from the state. With the additional funding for higher education in the governor’s proposed budget, California’s higher education system will be better positioned to take on the workforce challenges posed by the retirement of the baby boom.

California’s Future Workforce: Will There Be Enough College Graduates?