Motivating Californians to Fill Out the 2020 Census

The 2020 Census will determine the distribution of billions of dollars in federal funds and the accuracy of political representation at the local, state, and federal levels. Emphasizing the benefits to local communities is likely the best way to encourage participation and counteract the concerns many Californians have about confidentiality.

The latest PPIC Statewide Survey shows that 63% of Californians are concerned about whether the Census Bureau will keep their responses confidential, as the law requires. The concern is more acute among Latinos (74%) and African Americans (74%) than among Asian Americans (64%) or whites (52%). Immigrants are also much more likely to be concerned than US-born residents. 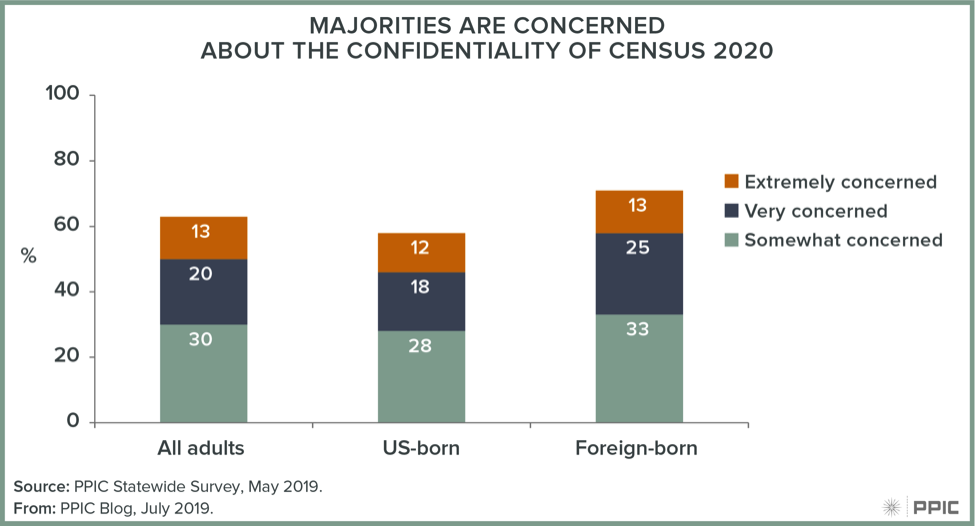 The Census Bureau conducted an extensive survey and a set of focus groups to identify key reasons for people’s possible reluctance to participate in the census, as well as potential motivating factors that could improve participation. The focus groups revealed that merely informing people of the Census Bureau’s data protection policies was unlikely to assuage concerns.

Focus group participants across all demographic groups identified the census’s role in providing federal funding for communities as the main motivator for responding to the census. And 62% of survey respondents said that benefits to the community—determining funding (30%), contributing to a better future for the community (17%), and providing information for local planning (15%)—are the most important reason to fill out the census. 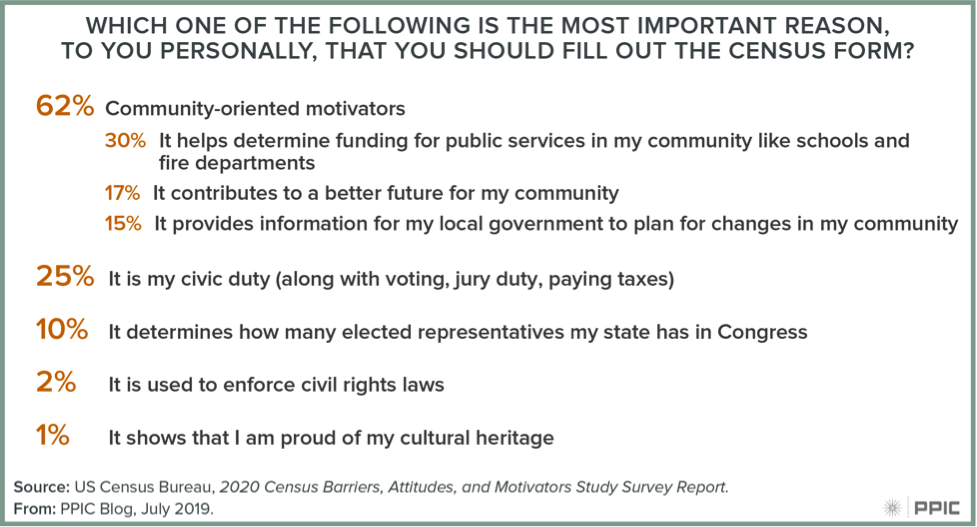 But fewer than half of survey respondents knew that the census is used to determine local funding levels, suggesting that this information could go a long way toward motivating participation. Focus group participants—who were chosen from demographic groups deemed likely to respond at low rates—also indicated that hearing directly from trusted voices in their own communities would be important.

Community organizations and elected officials are already acting on this information. On April 1, Los Angeles city and county officials convened a rally to promote the census, emphasizing the link to federal tax dollars for local programs. The Hispanic Federation’s messaging also highlights the census’s role in allocating federal funds.

Focusing on local funding and community benefits is a promising approach, but a strong outreach strategy will have to go further. A complete and accurate count will likely depend on hard-to-count populations working to develop and deliver the most effective messages for their own communities.