Caroline Danielson, Sarah Bohn July 25, 2018
NEVER MISS AN UPDATE!
Sign up for our blog alerts to receive insights from PPIC by email.

Roughly 2 million out of 16 million working Californians (ages 25‒64) live in poverty, according to California Poverty Measure (CPM) estimates—and nearly half (45%) of these workers are employed full time and year round.

We see a positive association between poverty rates and rates of full-time, year-round employment across regions. In other words, in areas of the state with higher shares of poor adults working full time—including Los Angeles and Orange Counties—the rates of poverty among working adults are also higher. 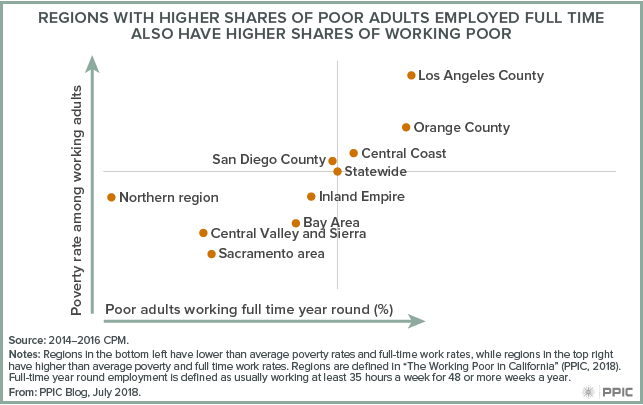 In those regions, working poverty is clearly not mainly attributable to working insufficient hours. It is driven by wage rates and other factors—measured in the CPM—like the cost of living, necessary expenses, and access to safety net resources (or lack thereof). For many of the working poor, the most promising strategies for improving wages require access to high-quality education and training.