Four days before dry lightning ignited this year’s statewide wildfire siege, state and federal leaders signed an agreement to vastly expand vegetation management in California. This signals progress towards shared management of forests to reduce the risk of large severe wildfires and improve their resilience to the changing climate.

More than half of California’s forests are owned by the US Forest Service (USFS); most of the rest are regulated by the state but owned by private landholders. In the agreement, California Natural Resources Agency and USFS Region 5 (which covers California) each committed to treat 500,000 acres per year with mechanical thinning or prescribed burning by 2025. This represents a doubling of USFS’s effort and at least a five-fold increase in state-funded work on private and other public lands.

But are current funding sources enough to keep pace?

Funding this work with revenues from harvested wood products or payments from beneficiaries of management—such as water agencies—is gaining traction, but only a handful of examples exist. So the main funders continue to be state and federal governments, whose combined budgets have nearly tripled in recent years. 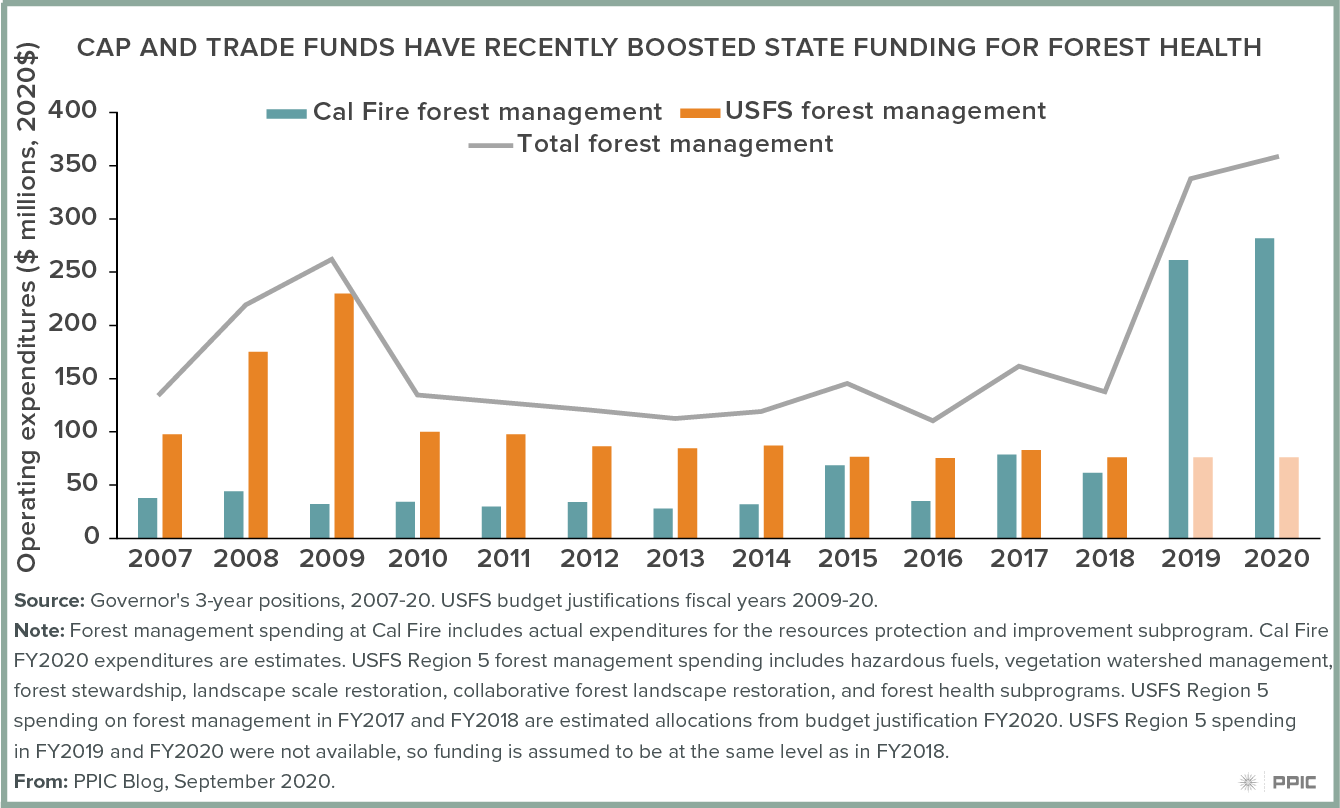 The sole driver of this increase is the state’s decision to fund forest health and fire prevention projects with cap-and-trade revenues. In 2018, the legislature committed $1 billion over five years for these purposes. This led to a nearly five-fold increase in funding for Cal Fire in 2019 and 2020, enabling a large increase in management work. A portion these funds went to projects on national forests.

Unfortunately, this increase in funding may be short lived. The pandemic-related economic downturn has called into question the future availability of cap-and-trade dollars for forest management. It also put the brakes on proposals for state bonds and other measures that would have put additional funds toward forest health.

Meanwhile, federal funding from USFS—around $84 million annually—has been relatively flat or declining in the past decade. To supplement these funds, the agency recently increased their use of external sources—including state cap-and-trade dollars. Looking back, USFS Region 5 received a major infusion of federal funds for forest management in 2008 and 2009. In 2008, Congress provided millions of emergency supplemental dollars to reduce hazardous fuels following a severe wildfire season in Southern California. And in 2009, federal stimulus funds from the American Recovery and Reinvestment Act (ARRA) were directed to scores of shovel-ready hazardous fuel reduction projects on national forests and private lands. ARRA may serve as a model as Congress considers an economic stimulus package to address the current recession. This approach could employ thousands of workers in communities that struggle with both high unemployment and extreme wildfire danger.

Periodic large infusions of state and federal funding have catalyzed spurts of forest management. But the “boom and bust” nature of this funding has downsides. Because these funds often must be spent on short timelines, they tend to prioritize efforts with quick turnarounds. This can make it hard to implement the long-term, large scale, collaborative efforts that are essential for promoting healthy forests.

When firefighting crews finally douse the last embers of the current wildfire siege, policymakers at the local, state, and federal levels will begin charting a path forward. Funding for forest management is vital to prepare California for wildfires in a warming climate. Forest owners will need access to a more reliable portfolio of funds to offset the costs of management. New stimulus funds could play a valuable role in maintaining momentum on forest management as state cap-and-trade funds become less certain. To avoid the pitfalls of the “boom and bust” cycle, new funding should prioritize investments—such as additional staff, equipment, and infrastructure—that enable long-term stewardship on all lands.